For Cookie's previous appearance in the Deadmines, see Cookie.

"Captain" Cookie is an elite murloc, captain of the Defias juggernaught, and the last boss of Deadmines in normal mode. In Heroic mode, there is one more boss after him. 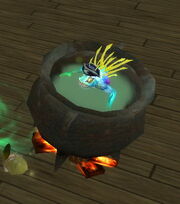 Cookie proclaimed himself captain of the Defias Brotherhood's juggernaut following its previous commander's death. Although he still performs his official duties as chief cook, anyone who questions the validity of his captain title has been known to come down with a severe case of food poisoning.

After Admiral Ripsnarl dies, Cookie will spawn inside the hut. He is heavily shadowed and untargetable. When you get near to him, he will run past you, to the center of the deck and spawn a cooking pot, then jump in it. If you get too close to the cooking pot, you will be dealt with fire damage. Cookie will throw food at random people, which will do damage and create food on the floor. There is Rotten food and normal food, the rotten food will emit a damaging aura to nearby players, if eaten it will debuff the player with 30% reduced movement and attack speed, and deal a DoT. The normal food when eaten will give players a stacking buff that increases movement and attack speed (with no stacking limit).

The Rotten food debuff can be dispelled by eating a normal food, thus not taking any AoE damage from the Rotten Food, and also keeping the normal food buff, which is 30% haste on casting, melee and range speed.

It is best if each member of the group eats one Rotten Food then eat one Normal Food to have the group have more space for movement. The achievement

[I'm on a Diet] still works if you alternate between Normal and Rotten Food. (And thus can be argued as the "correct" way of approaching this fight). Also, eating food does not de-select your dps/healing target, and everyone should therefore be able to eat everything around their feet, without moving and stop dps/healing the entire fight.

Note that Captain Cookie does not actually maintain a threat table. This fight can therefore be considerably shortened (and trivialized) by using 4 DPS and 1 healer.

On Ripsnarl's death
A shadowy figure appears in the ship's cabin!