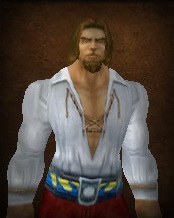 Bruce Callows was a human member of the Blackwater Raiders that was in Gilneas before the ports were closed. His ship, Brashtide, and his crew were held prisoner there and when the worgen curse swept through the land they were changed along with the Gilneans.

After Gilneas had "re-opened" their borders, for unknown reasons, Bruce joined the Bloodsail Buccaneers and became a lieutenant among them. He now commands a small party of pirates awaiting for further orders on an attack of Booty Bay.

Upon his death, his coin was brought to Fleet Master Seahorn, who knew him before Gilneas closed its borders. Seahorn then tossed the coin into the harbor of the bay, before saluting the fallen lieutenant.