The 1st Legion (or the Expeditionary Forces)[1] was the name of the Alliance military forces who accompanied Prince Arthas in his quest to Northrend to destroy the nathrezim Mal'Ganis. They were ultimately betrayed and slain by Arthas before being raised as undead.[2] Some of their ghosts are still haunting their original landing zone at the Forgotten Shore and the souls of yet more members are trapped in Frostmourne.[3]

The Expeditionary Forces hacking their way through the woods. 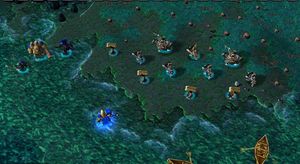 Arthas sending the Expeditionary Forces at his mercenaries.

The Expeditionary Forces came to Northrend under the command of Prince Arthas in order to combat the Undead Scourge and slay the dreadlord Mal'Ganis. Soon after arriving in Northrend they met up with Muradin Bronzebeard and his expedition and the forces united with one another. In time an Emissary arrived from King Terenas who ordered the expedition to return to Lordaeron, after Lord Uther had persuaded him to do so. Captain Luc Valonforth, in order to avoid the undead, order the expedition forces to cut their way through the woods in order to reach their ships. As the men began chopping their way through the words Captain Valonforth enlightened the Prince to their new orders. Knowing that he needed his men in order to slay Mal'Ganis, Arthas and a reluctant Muradin ventured forth to burn the ships in order to keep the men by his side. By the time the expeditionary forces finishing cutting through the forest, the last of their ships were burning and with Prince Arthas before them. Arthas quickly blamed the mercenaries (who he had hired) for burning the ships and led the expeditionary forces against them himself.

Oni'jus was one of Prince Arthas' infiltrators before the Third War.[4] 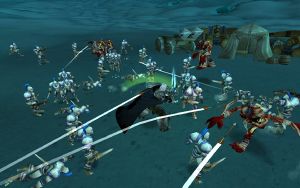 Arthas slaughtering and raising his own men.

It is quite likely that the 1st Legion was also the force which accompanied Arthas in his campaign through plague-ridden Lordaeron as seen in the Warcraft III human campaign. If so, this means that his forces made it to Icecrown after their prince became a death knight.

The mobs in the Halls of Reflection are probably meant to represent yet more members of the 1st Legion, when considering the presence of Shadowy Mercenaries among them.

Torgal and Maxwell were very likely members of the 1st Legion.