From Wowpedia
(Redirected from 2005)
Jump to: navigation, search

For other timelines, see Timeline.

As time passes in game, and the lore moves and changes, another story is written - the Real Life world surrounding the game. As people start to play over time periods of years they remember some events ingame as "Before X patch" or "I remember the first time World of Warcraft was in a question on Jeopardy". You also run into older players whose stories you may find hard to believe - was there really a plague that unexpectedly hopped out of a raid and into the capital cites? Was there really was a time when you had to land and pick a new flight-point at each flight-point?

This page follows the timeline from the release of World of Warcraft through present day in its culture as it applies to the players, helping us remember exactly when things happened.

What A Long, Strange Trip It's Been!

Development of World of Warcraft begins.[1]

Sometime in 2003: World of Warcraft friends and family alpha released 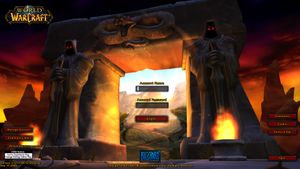 September 5 - it is reported that Blizzard has entered into an agreement with AT&T to handle the systems' servers.[3] 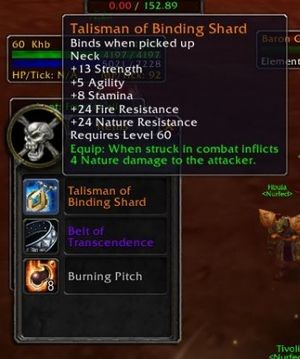 The first ever legendary item drop. 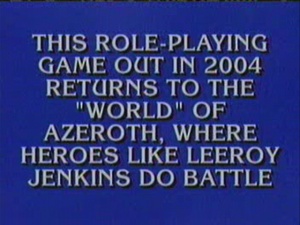 The first time World of Warcraft was an answer on Jeopardy! was on November 16, 2005.

March 23 - The first legendary item ever to appear to players in the game,

[Talisman of Binding Shard] drops in Molten Core. It is immediately hotfixed out of the game.

April 26 - World of Warcraft open beta test launches in China under licensee The9,[5][6] with 100,000 players signing up in the first hour of registration[7]

November 16 - World of Warcraft is featured in a question on the game show Jeopardy!

December 20 - The famous Numa Numa song comes to World of Warcraft on YouTube.[13] 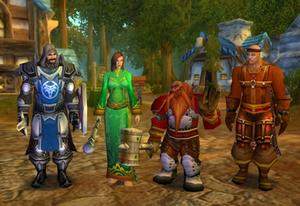 January - Blizzard comes under scrutiny by LGBT groups for prohibiting advertising a guild as being LGBT-friendly.[14]

Sepetember 22 - The game is brought up in an episode of Stargate: Atlantis

November 9 - Burning Crusade announced to be released on January 16, 2007 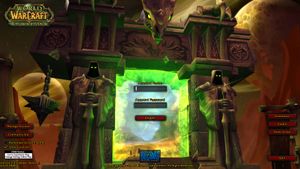 The World of Warcraft: The Burning Crusade login screen debuted with patch 2.0.1 and was the game login screen for 679 days. This was not quite the case for everyone, as players who had not yet bought the expansion still had the original login until they upgraded.

Sometime... - The Orc Statue was created.

November 20 - Blizzard advertises World of Warcraft on television with ads featuring William Shatner as a Shaman and most notably Mr. T talking about his Night Elf Mohawk 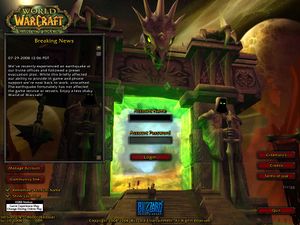 In July 29, 2008 a magnitude 5.5 earthquake struck near Blizzard's offices, causing them to post a message on their login screen about the effect on their in-game and telephone support. 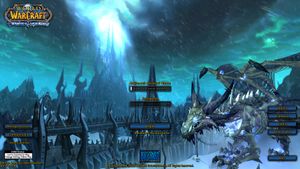 The World of Warcraft: Wrath of the Lich King login screen. This login screen debuted in patch 3.0.2. It is the second longest-running such screen for the game at, 770 days. As opposed to Burning Crusade, everyone was given this login, if they had the expansion or not. Some players did not care for the dragon roaring from this screen, giving them away to family when they tried to log in discreetly.

April 7 - The Daily Show plays a clip of Democratic US representative Jane Harman chiding another congressman (on an unknown date) saying:

"I actually suspect that the real reason we're here is so you can get some pointers on how to get past the seventh level of the World of Warcraft, but I do think you need to know that chairing this hearing is only worth two experience points."

June 30 - The original key-fob Authenticators first become available in the Blizzard Store. For the first few months the stocks sell out very quickly.

August 6 - World of Warcraft launches in Russia, along with the Burning Crusade expansion[9][20]

September 15 - Wrath of the Lich King release date announced to be November 13, 2008

October - The "Additional instances cannot be launched" issue begins on high-population servers. This continues to be an intermittent problem until after the dungeon finder is introduced in patch 3.3.0, the next year.

November 23 - All players logging in are awarded 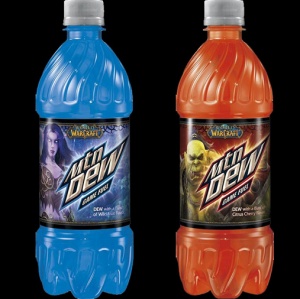 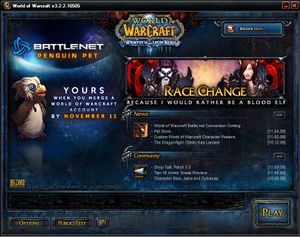 During the countdown to the Battle.net merger, Blizzard offered a companion pet to accounts that merged before the deadline. (While getting an in-game pet has been fairly common since, this was a first to players at the time.)

Either by or in 2009 - the "Ghostcrawler promised me a pony" saying became popular on the forums and around WoW sites, but it's hard to pinpoint when

June 6 - World of Warcraft shuts down in China

August 20 - The Mountain Dew Choose Your Side promotion ends

September 19 - World of Warcraft relaunches in China under its new licensee, NetEase

October 12 - Announcement that all World of Warcraft accounts must be merged with Battle.net accounts.[24]

November 11, 12 - The deadline passes for account mergers with Battle.net for US, EU players

November 22 - All players logging in are awarded 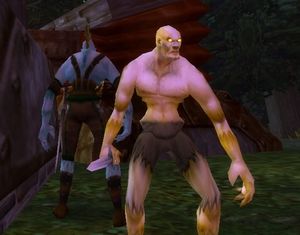 In China, bones are covered up as with this Forsaken. This led to the need for a massive graphical overhaul before Wrath of the Lich King could be approved. 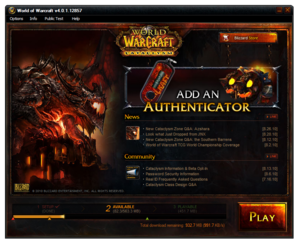 Previously, you could not play the game until the entire patch was downloaded. 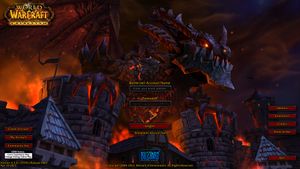 The Cataclysm Loading Screen debuted in Patch 4.0.3a, and was around for only 644 days - the shortest duration for a loading screen.

February 12 - The People's Republic of China approves World of Warcraft: The Burning Crusade for release, three years after its release everywhere else

May 3 - The Friends & Family phase of the World of Warcraft: Cataclysm alpha begins[25]

July 6 - Blizzard announces their intention to have Real ID names visible when posting on the official forums.[27] This resulted in a massive outcry against the idea, based primarily on concerns about privacy issues and potential harassment.

July 9 - Due the overwhelming flood of criticism, Blizzard rescinds their plan to put Real ID names on the official forums[28]

July 27 - Blizzard releases Starcraft II: Wings of Liberty, notable in that it was Blizzard's first non-Warcraft related game in ten years, since 2000's Diablo II. Many were curious what the effect would be on the player base, but the implementation of the Real ID system ensured that players playing Starcraft could keep up with their friends in World of Warcraft.

September 7 - The first in-game events leading up into the Cataclysm Expansion begin, with Operation: Gnomeregan (Alliance) and Zalazane's Fall (Horde)

October 7 - World of Warcraft reaches 12 million players[31] for the first time, and the all time record

October 17 - All but one of WoWWiki's active administrators leave Wikia forming Wowpedia. Over the next couple weeks, most of the active users follow.

November 30 - All players logging in are awarded 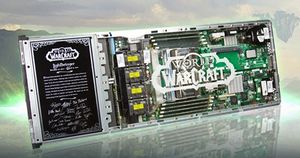 The original Lightbringer realm server, cleaned up and engraved to be auctioned for charity in October-November of 2011

January 27 - Blizzard files complaints with the online service PayPal in an effort to make payment difficult for gold sellers.[32]

September 16 - World of Warcraft: The Magazine closes after five issues[33]

WoW's 7th Anniversary and a

December - World of Warcraft reaches 10.2 million subscribers, down from 12 million 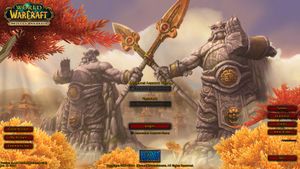 The Mists of Pandaria login screen debuted in patch 5.0.4, and is the longest-running login screen, running 777 days.

October 7 - World of Warcraft is hacked on some servers, and both players and NPCs die en masse. Blizzard quickly hotfixes this in a few hours and the issue is resolved. [37]

WoW's 8th Anniversary and a

December - An amusing glitch for some people lists Real ID and battletag friends as last being online "43 years ago". Who knew the game was so popular in 1969? 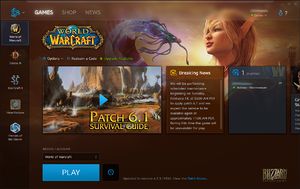 July - World of Warcraft player numbers come down to 7.7 million subscribers, almost down to half of its record subscriber base of 12 million in December of 2010.

July 30 - One of the world's most famous World of Warcraft parodies, That's the World of Warcraft That You Play!, comes out with an updated version with Mists of Pandaria uploaded by ibeckman671 on YouTube[38]

August 23 - It is announced that World of Warcraft Trading Card Game will end with Set 21, Timewalkers: Reign of Fire being the last set made.[39]

WoW's 9th Anniversary and a

December - World of Warcraft reaches 7.8 million subscribers, up from 7.7 million

December 9 - It is revealed that the United States NSA (National Security Agency) and the United Kingdom's GCHQ (Government Communications Headquarters) have been actively spying on MMORPGs, including World of Warcraft.[40] 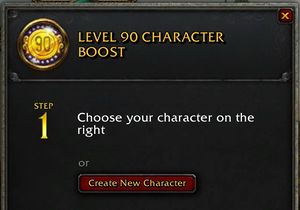 The Character Boost setup, step one. 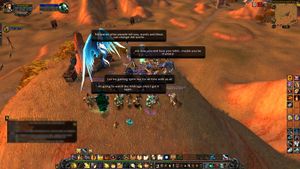 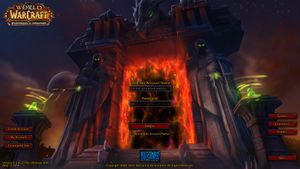 The Warlords of Draenor login screen debuted in patch 6.0.2 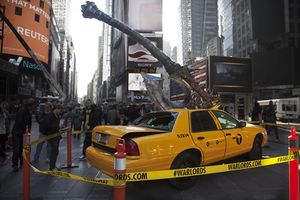 The Iron Horde makes its mark on Times Square 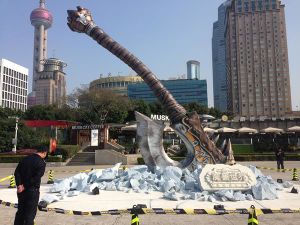 The Iron Horde makes its mark in Shanghai, China

February 10th - Blizzard Entertainment gets the street that runs between their buildings renamed "Blizzard Way", but the street sign is misprinted "Bizzard Way"[42]

February 11th - Blizzard announces it is retiring the Scroll of Resurrection on February 18th.[43]

July 4 - Blizzard releases some comical "extra footage" from the Mists of Pandaria cinematic, featuring the human and orc characters drinking in a tavern, supposedly shot "just moments after" the original cinematic's end.[48]

August 12 - Following the death of comedian and actor Robin Williams, known to have himself been a player of World of Warcraft and Warcraft III, many players ask for an NPC to be created in his honour, with one player even creating a petition on Change.org, gathering more than 10,000 signatures in just 16 hours.[49] On August 12th, following assurances from CM Celestalon and Williams fan Brian Holinka,[50] the official World of Warcraft twitter account tweets ".@robinwilliams Thank you. You gave us so much joy in our lives, and we hope you enjoyed your time in our world. We’ll see you in-game."[51] The message is widely taken as confirmation of the creation of an in-game tribute.

August 14 - Blizzard debuts the Warlords of Draenor cinematic at GamesCom, and announces a release date of November 13th.

October 8 - The last of the planned realm connections is completed, almost a year after the first realms were connected.

November 11 - In anticipation of the release of Warlords of Draenor, a special feature is created in Times Square, New York.[52][53]

November 13-16 - For the first time in several years many players experience queues to get into the game, some showing backups of thousands of players and hours of waiting. Debate on fansites are confused if this is due to Blizzard not having enough servers or a continuation of the DDoS attack. By Sunday the 16th, many of the problems were ironed out.

November 19 - It is announced that Warlords of Draenor sold 3.3 million box copies (the majority of players had pre-ordered digitally) and the subscriber base was back up to 10 million.[57]

[WoW's 10th Anniversary], along with the

July 29 - In a break from tradition, Blizzard announces that the next expansion will be revealed at Gamescom 2015.

August 4 - Blizzard announces that subscriptions in the second quarter of 2015 dropped to 5.6 million in 8 months - the lowest since 2005 and the sharpest decline yet, but still posted "better than expected financial results".[60] 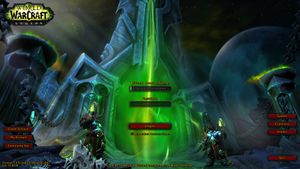 May 24 - Warcraft film premieres in Paris 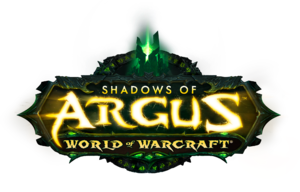 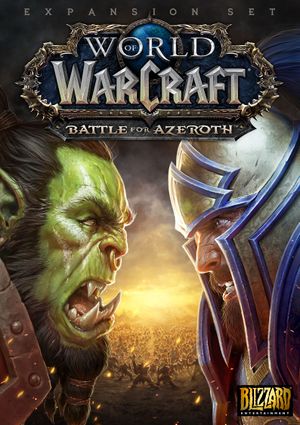 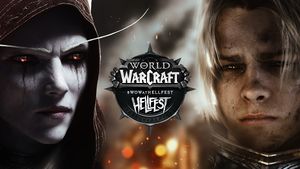 Things which have not occurred yet, but are sure to occur or have been scheduled