From Wowpedia
(Redirected from 8.2.5)
Jump to: navigation, search 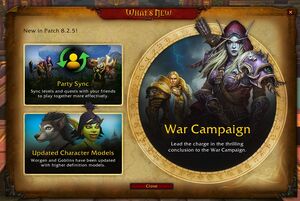 The patch was deployed on the Public Test Realm on August 1, 2019.

Celebrate 15 Years of World of Warcraft

This November is the 15th anniversary of World of Warcraft, and we have some special things planned to commemorate the occasion.

Players who log in during the event period will receive an Anniversary Gift in the mail, which includes a

[Lil' Nefarian] battle pet, a Celebration Package that increases experience and reputation gains throughout the event, a reusable firework that can be used for the duration of the event, an item that teleports you to the Caverns of Time (usable only during the event), and other in-game goodies.

Chromie has separated the strands of time, allowing you to go back and relive epic raid encounters from Burning Crusade, Wrath of the Lich King, and Cataclysm. Each of these limited-time raids will feature three iconic bosses, and they'll be available as their own wings through the Raid Finder.

To enter the raid, you need a minimum item level of 380. Players who complete all three wings will receive the achievement Memories of Fel, Frost and Fire which grants the

Run down your enemies, raze their fortifications, and exchange the tokens you loot from their corpses to summon mighty reinforcements in Korrak's Revenge, a throwback Battleground inspired by the earliest days of Alterac Valley.

Players who participate in Korrak's Revenge and complete the Alterac Valley of Olde achievement can earn two new mounts: the

[Stormpike Battle Ram] (Alliance) and the

Many new stories and adventures are now available across Azeroth.

Tensions continue to rise between Saurfang, Anduin, and the Banshee Queen Sylvanas. Discover the fate of the Horde and Alliance in the final chapter of the War Campaign.

With N'Zoth's imminent emergence, you must seek help from an unlikely ally: the Black Prince, Wrathion. Level 120 players should seek out Magni in the Chamber of Heart to continue the story and discover the Black Dragonflight's whereabouts.

Making it Easier to Party Up with Friends

Party Sync is a new feature that makes it easier than ever for friends to party up and quest together. When players activate Party Sync, everyone in the party becomes aligned to the same quest state and phase. By mousing over a quest in your tracker, you can see who's on a given quest, what their progress is, and who's ready to turn it in. You'll also have access to a "replay quest" feature that allows players who have already completed certain quests to replay those quests with their friends for rewards that are appropriate to their current level, regardless of the original level of the quest. Quests can be replayed for rewards once a day.

We've also relaxed level restrictions, so lower-level players can queue for instanced content (such as Battlegrounds and dungeons) in their level range, and higher-level players can choose to join them by having their level scaled down. Please note that unlike Timewalking, when your level is scaled, you will temporarily lose access to abilities and powers (such as Azerite Traits and over-level spell, abilities, talents, and trinkets' effects) with requirements that exceed your reduced level.

Ready to bring your friends to Azeroth and show them the ropes? Doing so is easier than ever with our revamped Recruit A Friend system! If you have active game time, you'll be able to recruit up to 10 friends—both veterans who haven't been subscribed for over two years and newcomers—to share in your adventures. Enjoy 50% bonus experience for faster leveling when you and your recruit are partied together and summon each other once every 30 minutes.

The new Recruit A Friend lets you generate a custom link that you can send to your friends. This link will help you connect with each other, and you'll be able to see if they have purchased game time, which will lead to rewards for you! For each month your recruits have active game time, you'll earn a new reward, such as unique pets, mounts, game time, and more. These rewards unlock each month and scale with the amount of time your recruits have subscribed for. And, of course, with Party Sync you'll be able to journey with your friends on any of your characters.

Stormsong's Beekeepers have discovered a new hive in town. Alliance players can work with Barry to locate the hive and court the favor of the Hivemother in order to earn the Honeyback Harvester mount—and both factions can earn several other bee-themed toys and items.

While Cataclysm Timewalking is active, max-level players will be able to form a raid group and enter the Sulfuron Spire raid. As with previous Timewalking raids (Black Temple and Ulduar), your gear and power are scaled to the challenge, and all the bosses and rewards you expect lie in wait.

Embark on an adventure around Kalimdor and the Eastern Kingdoms to complete the Rite of the Moon and help an old druid bless her Staff of Moonflowers. In return, she will enchant your flower crowns so they never die, and you can transmogrify them year-round!