A'dal is the naaru leader of the Sha'tar and rules Shattrath with a gentle demeanor. It shimmers like a chained sun. Unleashed, A'dal's power might destroy cities or topple mountains.[3]

It is a level 73 quest giver located in the central dome of the Terrace of Light next to Khadgar, in the neutral city of Shattrath.

As with most of the naaru, little is known of A'dal personally, though it appears to count Khadgar and Velen as personal friends. Right before the invasion of Outland began, Khadgar and Velen reached out to the naaru independently, both seeking aid against the dark forces amassing on Outland. The Army of the Light heard their pleas but the Army's battles with the Burning Legion were costly and ceaseless, so they could not spare soldiers to protect Outland. Instead, A'dal, M'uru, and O'ros volunteered to help the people of Outland and arrived with Tempest Keep.[4] A'dal and his compatriots, the Sha'tar, arrived and assisted the Aldor in reclaiming the ruins of Shattrath City. A'dal also approved an alliance between Shattrath's forces and the Sons of Lothar, to the extent that Khadgar moved to Shattrath to assist the Sha'tar.

At some point after Illidan's victory over Magtheridon, an army of blood elves marched on the city. But instead of laying siege to Shattrath, their leader, Voren'thal the Seer, kneeled before A'dal and pledged the support of his forces, the Scryers, to the cause of A'dal and the Sha'tar. Maiev Shadowsong attempted to get A'dal and the Sha'tar to fight the forces of Illidan alongside her, but A'dal stated that the Burning Legion was a greater threat and because Illidan also fought the Legion he was not an enemy of the Sha'tar. A'dal did, however, try to convince Maiev to ask the Scryers for aid. Maiev turned down this offer.[3] 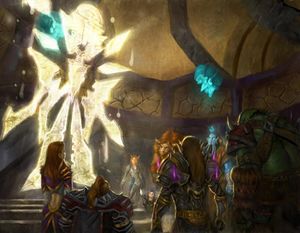 A'dal in the TCG.

At some point prior to the blood elves' assault on Tempest Keep, Velen made a cryptic prophecy concerning the redemption of a people cursed by blood. A'dal and the other naaru realized what was to come, allowing M'uru to be captured by Kael'thas Sunstrider's forces and sent back to Silvermoon to power the Blood Knights. Ultimately, the prophecy was proven true when M'uru was again kidnapped by Kael, this time stealing him away from his own people. With the entirety of Kael'thas's betrayal now exposed, Lady Liadrin journeyed to Shattrath City to beg the naaru's forgiveness. A'dal revealed the nature of the prophecy and assured the Blood Knights that the naaru harbored no ill will towards them. Liadrin promptly re-dedicated the Blood Knights to furthering the cause of the Sha'tar and stopping their former Prince once and for all. 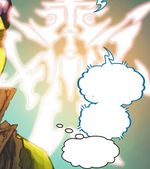 A'dal in The Comic

When Med'an and Maraad visited Shattrath, A'dal urged Med'an to meditate on his decisions, cautioning that his choices could lead him to become a weapon against evil or a bringer of doom.

In Icecrown, Crusader Bridenbrad is struck with the Plague of Undeath during the assault on Scourgeholme. Tirion Fordring sends willing adventurers to Remulos, Alexstrasza, and eventually A'dal in an attempt to save Bridenbrad. After completing the quest, Crusader Bridenbrad ultimately dies, only to have A'dal appear along with two other naaru: K'uri and M'ori. A'dal personally tells the adventurer that "The Light does not abandon its champions.", and instead of becoming a mindless undead ghoul for the Lich King, Bridenbrad "shall taste only paradise".

Likely under Khadgar's request,[5] A'dal sent General Tiras'alan and other draenei to Theramore,[6] commanding them to protect and defend the port city against the Horde.[7]

Gossip
<A soothing light fills you as you approach the naaru. Slow musical chimes echo within your mind and, though a word is not uttered, you feel an assurance of safety. You are welcome in Shattrath City.>