From Wowpedia
(Redirected from A Blaze of Glory)
Jump to: navigation, search

A Blaze of Glory is the third act of the The Founding of Durotar campaign.

It was the final confrontation between the Horde, led and championed by Thrall and Rexxar — of the Mok'Nathal — and the Kul Tiras invasion force, led by Admiral Daelin Proudmoore.

Moments later, Thrall, Rexxar and the warriors of the Horde gather along the coastline to plan their final assault on the grand admiral's bastion of Theramore Isle.

In response to the increasingly aggressive human incursions into Durotar, Thrall and Rexxar had gathered together the various component races of the Horde and marched upon the Kul Tiras army, scoring an important victory over Proudmoore's forces at Tidefury Cove. Having regained the coast, Thrall and Rexxar plotted their next move against the armada of Kul Tiras battleships blockading Theramore Isle, Proudmoore's stronghold. As they strategised, they were approached by Jaina Proudmoore. She told Thrall of a Goblin Shipyard on an outlying island of the archipelago, with which the Horde could construct a fleet to battle the Kul Tiras blockade. Although she gave her blessing to the attack upon her fanatical father, she pleaded with Thrall to avoid destroying her own forces in the impending battle, to which the Warchief agreed.

Admiral Proudmoore has constructed a fortress on Theramore Isle. This is his base of naval operations, from which he plots the destruction of the Orcs. Jaina has found a Goblin Shipyard that can construct Orcish Juggernauts that will help you destroy the Admiral's fleet, which is guarding the island. Jaina has asked that you spare the lives of her men; they are only following the Admiral's orders.

The ships guarding Theramore have fallen to your might, but now one final task remains. Slay Admiral Proudmoore and put an end to the years of Orc slaughter he has proudly committed. Though the threat of Human incursions into Durotar will always remain, the destruction of Admiral Proudmoore and his navy will severely hinder their ability to threaten the Orc clans.

The forces of the Horde assemble on the coast. Thrall rides up to Rexxar.

Rexxar: Warchief, our troops are ready, but the Admiral's assembled a blockade of battleships around Theramore. There's no way we can match their firepower.

Thrall: Damnit, I should have thought of this sooner. We've got to find some way to--
The conversation is interrupted when Jaina teleports in.

Jaina Proudmoore: Thrall, Rexxar... I come in peace. You must believe me--I had no part in my father's plans. I wish none of this had ever happened. I... I don't know what to do.

Thrall: We've bled together on many battlefields, Jaina. We've faced untold perils as allies. But your father threatens the security of our nation and the very future of my people. You know how this has to end.

Jaina Proudmoore: I know, Thrall. Do what you must. There is a goblin shipyard on a nearby island that could provide you with warships of your own. With those, you could scatter the blockade surrounding Theramore.

Jaina Proudmoore: But please, spare my men if you can. My father will try to use them against you, but they're the only real family I'll have left when this is over. Please do this... for me.

Thrall: We'll do all we can, Jaina. You have my word. Now you'd better make yourself scarce. The battle's about to begin.
Jaina teleports away.

Rexxar: Our forces are ready, Thrall. It's now or never.

Thrall: See it done, Rexxar. I'll meet you at Theramore.

Rexxar: There, the goblin shipyard Jaina spoke of! Now we can hire their juggernauts to help us break the blockade.

Rexxar: The blockade is broken! Board the transports, quickly! We must land on Theramore and crush the admiral's defenses!

Thrall: You've done well, Rexxar. You're a natural leader. You remind me of Hellscream, in a way.

Rexxar: Thank you, Warchief. Now only one task remains. We must storm the citadel and deal with Admiral Proudmoore once and for all.

Thrall: Now, warriors, we must storm the citadel! We must find Admiral Proudmoore and put an end to him. Only then will our nation be safe.

Rexxar: Lok-Tar Ogar! For the Horde! For Durotar!

NOTICE - You are only able to control your Heroes while attempting to kill Admiral Proudmoore. The rest of your army will automatically engage Proudmoore's forces.

Rexxar: The admiral's elite guard are trying to cut us off! Slay them all!

Grand Admiral Proudmoore: I must admit, you orcs are more tenacious than I remembered. I thought you savages would have turned on each other by now.

Thrall: This is not the Horde you remember, old man. We have no interest in conquest or murder. We have paid for our sins of our forebears in blood.

Grand Admiral Proudmoore: Can your blood atone for genocide, orc? Your Horde killed countless innocents with its rampage across Stormwind and Lordaeron. Do you really think you can just sweep all that away and cast aside your guilt so easily? No, your kind will never change, and I will never stop fighting you.

Rexxar: It's over! Stand down, humans!
Jaina runs up to her father's body and kneels down beside it.

Rexxar: Above all else, Jaina, he was a proud warrior. Remember him as such.

Thrall: Durotar is now safe. We have no further quarrel with these humans. We will leave your isle in peace, Jaina. I pray we never have to come here again. Farewell, sorceress.
Thrall and Rexxar leave Theramore Isle.

Thrall: You saved our nation, Rexxar. For that, I can never repay you. Will you return to Durotar with us and make a new home for yourself?

Rexxar: I appreciate your offer, Thrall. But I am Mok'Nathal--a wanderer. I belong in the wilds, amidst the beasts and elements of the land. But know this, brother: I will always be a part of the Horde. I will always be there when you need me. Farewell. 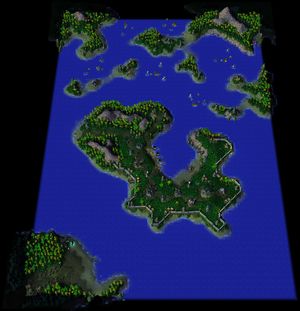 With his companions Cairne Bloodhoof the tauren chieftain, Rokhan the troll shadow hunter and Chen Stormstout the Pandaren brewmaster, Rexxar landed on the outlying island and defeated the Kul Tiras forces who were occupying the island. Having gained the shipyard, the orcs quickly put the Goblins to constructing juggernaughts and frigates, with which they then engaged the Kul Tiras armada. A furious battle on the waves ensued. The Kul Tiras forces used their fortifications and siege weaponry to shell the orc ships as they traded cannon fire with the human fleet. Although they were successful in destroying a good many of the goblin-made ships, Rexxar's forces were eventually able to sink all six of the Kul Tiras battleships, forcing the remains of the fleet into disarrayed retreat. With the blockade broken, Thrall quickly ordered his troops onto waiting transports, and began the invasion of Theramore Isle. 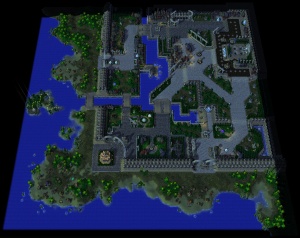 The gathered armies of the Horde, led by Thrall and Rexxar, landed upon Theramore Isle and unleashed their full fury upon the walls of the city. The Horde launched a three-pronged attack: the trolls and ogres attacked from the west, the tauren attacked from the south, and the Orcs attacked from the southwest. They met stiff resistance in the form of Admiral Proudmoore's elite guard, Theramore's powerful automated defense towers, and Jaina Proudmoore's own forces. The Alliance forces defended the Citadel fiercely, fighting with an intense hatred for the Horde whom they believe to be the same as the one that ravaged their homelands and many warriors on both sides perished. Their counter-attacks overran several Horde landing sites but finally Rexxar and his companions were able to fight their way through the heavy melee, defeating the Admiral's personal guard before engaging Daelin Proudmoore himself. Although Proudmoore was a ferociously powerful warrior and sorcerer, he was finally slain in the epic battle by Rexxar's party. With the Admiral's death, Rexxar ordered the rest of the Alliance forces to stand down; Jaina Proudmoore materialized, to mourn over the body of her proud, stubborn father.

Having no quarrel with the remaining humans, the Horde returned to Durotar, leaving Jaina Proudmoore to rebuild her small empire. Thrall offered Rexxar a champion's welcome at Orgrimmar, which Rexxar refused, saying he was a lone wanderer at heart. However, the half-ogre considered himself as part of the Horde ever after, and was and is at Thrall's service, should the Warchief ever call upon the beastmaster's considerable talents again.

The Horde and Theramore returned to peace, but all was not well across the sea. When the people of Kul Tiras learned of their Lord Admiral's death, they cried out for vengeance, but the other nations of the Alliance were not interested. Ordeals caused by the plague in Lordaeron were more immediate concerns, and the other allied leaders also had little pity for Daelin's own aggressive actions. The people of Kul Tiras furiously isolated themselves from the rest of the Alliance, but were not angry with all of the Alliance leaders. They instead nursed a bitter hatred only towards Jaina for betraying her family.[1]