A Bold Idea begins the fifth stage of the Isle of Thunder storyline, gaining access to the Stormsea Landing. Taoshi will only offer this quest from her position on the Violet Rise once enough realm-wide progress has been made, irrespective of the individual player's standing with the Kirin Tor Offensive.

[90] To the Skies!, this quest mostly takes place in a single-player scenario called "Stormsea Landing". As the scenario can only be completed once, it is documented here and not in a separate article.

Infiltrate Stormsea Landing and open the courtyard gate from within. Speak with Taoshi to begin the mission.

Zandalari warships plunder the seas around this island. They ferry in soldiers and war beasts from Zandalar to bolster Lei Shen's army.

If we can capture the palace shipyard, the Thunder King's supply line will be cut off, and your foothold here will be secure.

I have a plan to do just that, and it won't take an entire army.

Well done. That warship won't be raining fire on us again any time soon.

Taran Zhu has informed me that the Shado-Pan will keep vigil over Stormsea Landing, freeing Kirin Tor resources to press the siege elsewhere. Taoshi will be there. I am sure she will be glad to work with you again.

We are all grateful for your contributions, <name>. Thank you. 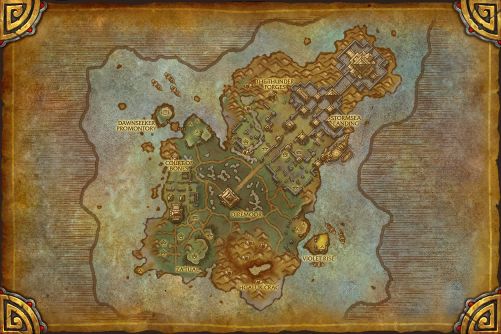 Once enough realm-wide progress has been made, Lady Jaina Proudmoore, Taoshi, and Taran Zhu move over by the stables. Taoshi will offer this quest.

Speak with her again:

I believe Thunderwing here is our opportunity to score a devastating blow against Lei Shen.

I'm with you. Let's break into that shipyard! [Queue for solo instance.] 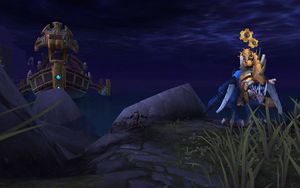 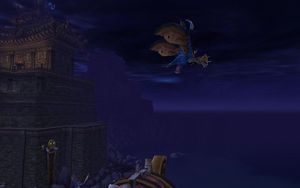 Taoshi says: I count six... no, seven guards on patrol in the sky.
Taoshi says: One of them flies higher than the others... He loops far out over the water - alone. He is over-extending. That is our in.
Taoshi says: We will neutralize him and take his route. Let's go!

Hop on. Taoshi will take the skyscreamer northward and attack the over-reaching guard: 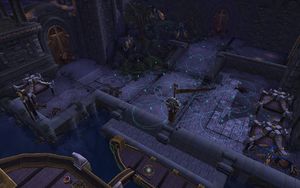 The path to clear

Drop smoke bombs on sentry totems to deactivate them.

Taoshi says: The Zandalari are more cautious than I thought. Look down there - swarming with patrols.
Taoshi says: And their shaman have laid out a network of sentry totems.
Taoshi says: One of these smoke bombs will blind a sentry totem.
Taoshi says: Clear a path from the ship to the gate at the upper level - we will need to cross on foot.
Taoshi says: We cannot circle up here for long. Do what you can while I plan our next move.
The skyscreamer makes a first pass, heading a bit further southwest to get closer to the main gate, where Shan Bu is awakening Hu'seng the Gatekeeper.
Shan Bu yells: Awaken, Hu'seng! The docks are your responsibility. See that none pass his majesty's gates.
Hu'seng the Gatekeeper says: The Thunder King wills it; it shall be done.

While on Thunderwing, the champion has access to one ability:

Use the smoke bomb to take out 10 totems. Taoshi will only allow ten to be taken out, so choose targets wisely!

Stage 3: Shadows in the Storm 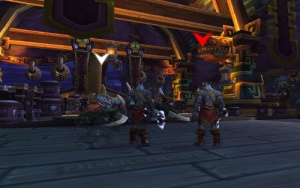 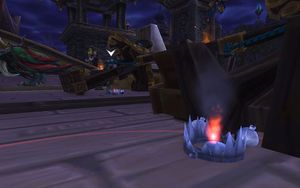 Knock out the crew members marked by Taoshi and sneak to the siege weapons at the front of the ship.

Taoshi says: Our time is up. We need to get aboard that ship.
Taoshi says: We should sabotage the siege weapons toward the bow. Then we will go below decks and find the captain.
Taoshi lands Thunderwing on deck astern, portside.
Taoshi says: Easy now... Get in close and incapacitate them.
Taoshi nods towards the crewman on the right. Sneak up behind him to knock him out!

On foot, Taoshi buffs the champion with Infiltrating Stormsea Landing: "Taoshi uses Wu Kao shadow arts to stealth herself and her ally, enabling the use of Knock Out on targets afflicted by Mark of Taoshi. May be detected by enemies within 5 yards or revealed by sentry totems." The champion will have a 5-yard-radius circle extending from it's position. So long as no zandalari get within that circle, the champion will stay stealthed. However, to use Knock Out, which is provided via the bonus action button, get behind the marked Veteran Wingrider and inch forward until the red circle includes the NPC. This will bring up the bonus action button, so use it.

If the champion's cover is blown, Taoshi will drop a purple smoke flare on the ground that functions like a

Taoshi says: Here! Into the smoke!

Step into it to regain stealth.

Taoshi says: There will be a very unpleasant surprise waiting for the next troll who disturbs these. Let's keep moving.

Taoshi will mark one of two wingriders near the skyscreamers. Tap it and Taoshi will do her thing, then trap the two port-side siege weapons. Incapacitate the last wingrider to finish this stage. 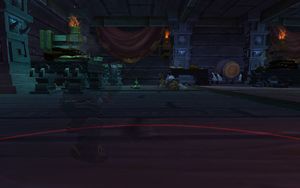 Taoshi keeps moving astern past the last wingrider and heads below deck via the now-opened pathway down. Once below decks, she inches forward until she spots Captain Halu'kal:
Taoshi motions at Captain Halu'kal, then draws a finger across her neck.

Follow Taoshi forward, then get within range of Halu'kal and attempt to kill him:

Captain Halu'kal is a level-90 elite Zandalar troll with 2 million health. See his article for abilities and a full strategy.

Get out of the Wallop area of effect and try to run away from the Keg Toss. Halu'kal will gain Well Fed on occasion, which will heal him and increase his damage output for ~12 seconds.

Occasionally, a Drunken Wingrider will awaken with a terrible Hangover. Take it out or not (it only has 788K health), but keep focusing on the captain. 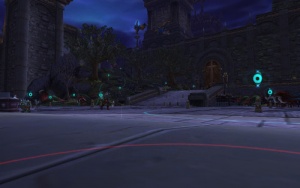 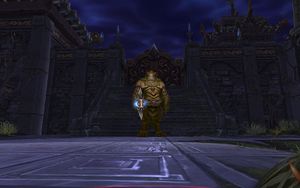 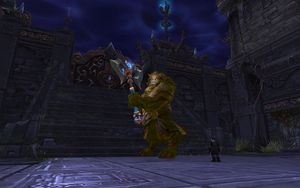 Sneak across the shipyard and up the hill to reach Hu'seng the Gatekeeper.

Taoshi says: Not as quiet as I would prefer, but it works.
Taoshi makes her way to the exit below deck.
Taoshi says: The courtyard gate is directly up that hill.
Taoshi says: Remember to stay clear of those sentry totems.

Taoshi will tag along beside the adventurer. Assuming a decent path was made, move along it to get up the hill toward the gate. Zandalari Spirit-Twisters and Zandalari Beast Handlers lead Zandalari Conscripts in patrols of the grounds. Steer clear of the patrols and also of the blue circles denoting the range of the sentry totems.

Should the champion enter the detection radius of a sentry totem, the totem will move a beam of light in the direction of whomever it detected. If the beam reaches the intruder, it will break the champion's and Taoshi's stealth for 10 seconds.

Along the way, the trolls find out about the trapped siege weapons the hard way:

Taoshi says: Sounds like they found our little present.

Keep moving up the hill and get close to Hu'seng:

Stage 6: Light Up the Night 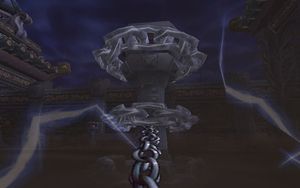 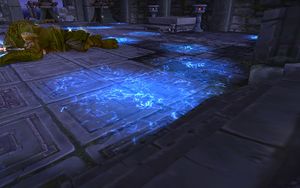 Slay Hu'seng the Gatekeeper and recover his key.

Hu'seng the Gatekeeper says: There is no escape now. The only way out is through me!
Taoshi says: Through you, is it? I think we can manage that.
Taoshi says: Would you prefer we go through the belly, or the ribcage?

Hu'seng the Gatekeeper is a level-92 elite terracotta warrior with almost 4 million health. See his article for abilities and a full strategy.

Hu'seng will likely start off with an Empower Axe cast. Start running away from him with help via the Fixate speed increase, but don't get too far that he starts casting Hook.

At 50% of total health remaining, Hu'seng will cast Cease, summoning chains that will root the champion in place. The chains only have ~100K health, so quickly destroy them before he gets his Desist cast off, which will hit all units in the marked area of effect for ~150K Physical damage.

At 20% total health remaining, Lei Shen will get upset and unleash a Lightning Storm upon the area. Standing in the pools will inflict 15K Nature damage a second, so move quickly.

Hu'seng the Gatekeeper says: None... shall...
Taoshi says: Well fought! Now - the gates. Before the thunder king's entire army comes down on us! 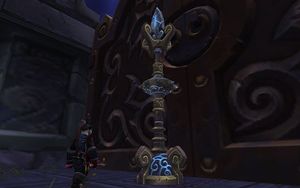 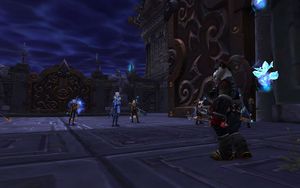 Use the Gatekeeper's Orb to open the gate to the Bloodied Crossing.

Tollow Taoshi up the steps to the Bloodied Crossing and use the orb on the Deactivated Access Generator.

This completes the "Assault the Shipyard" portion of

Follow Taoshi and interact with the portal to end the scenario and return to the Violet Rise. Speak with Jaina to turn in.