A Brewing Storm is a scenario in World of Warcraft: Mists of Pandaria. The Brewmasters are trying to create a brew that can only be made during a storm.

Craft brew with lightning and save the monastery from a rampaging saurok.

Help Blanche prepare the most epic brew in the history of Pandaria!

Brewmaster Blanche’s Boomer Brew is an age-old recipe, with a secret ingredient: a thunderstorm in every mug! Brewing it isn’t easy, requiring travel to one of the highest peaks of the Jade Forest... During a raging thunderstorm. And what is it about heavy rain that always brings out the saurok? Blanche is going to need some mercenary help to brew her masterpiece, preferably some fleet-footed adventurers who know how to fight off a saurok incursion while dodging lightning strikes. When the saurok take the fight to the nearby monastery, it might just be the Boomer Brew that helps turn the tide of battle![1] 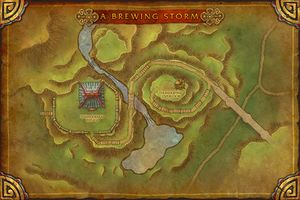