A Dark Covenant is chapter 2 of Curse of the Blood Elves in Warcraft III: The Frozen Throne.

After the previous battle, Garithos returned to the front, while Kael awaited for orders. The next day Garithos sent an emissary that ordered all of Kael's cavalry, artillery and support troops to pull back to the west at the Front Line, leaving Kael and his Blood Elves virtually defenseless. The large Undead force, commanded by the dreadlord Dalvengyr, quickly overran the Blood Elves' outlying bases; Kael and his warriors were surrounded and they didn't know what to do, but then Vashj and the Naga appeared, in desperation, Kael again entered in a pact with Vashj. With the aid of the Naga, the Blood Elves defended their last base and turned the tide against the Undead. First they recovered one of their outlying bases with a gold mine. They continued fighting the Undead and retook the other outlying bases one by one. Finally, the Blood Elves and Naga stormed Dalvengyr's base, slew the dreadlord, and obliterated his remaining forces.

Kael thanked Vashj for her aid, but feared that he had incurred the wrath of Garithos. Vashj encouraged Kael to abandon his prejudiced human commander and lead his people to a destiny of power and glory. Kael then told Vashj that ever since Quel'Thalas had been destroyed, he and his people had been suffering from a strange, unexplainable hunger. Vashj explained that this hunger was brought about by their addiction to magic. Now that the Sunwell had been destroyed, Kael and his people had been cut off from their ancient source of power. Kael was horrified. Without a new source of magic, his people were doomed to an existence of mortality. Vashj suggested that Kael seek out demon magic. Kael balked at this idea but before they could go any further, Kael learned that Garithos was returning from the front. Kael told Vashj to leave before Garithos saw them.

With the bulk of the Alliance troops on his side, Garithos had been able to force the enemy into retreat; however, returning to Dalaran he and his knights spotted several Naga warriors slithering to safety, and, infuriated, he accused Kael and his men of being traitors. Kael tried to explain his actions, but Garithos ignored him and had Kael and all of his Blood Elves arrested and jailed in Dalaran's dungeons to await execution.

Lady Vashj and her Naga minions watched all this in hiding.

The next day, at the Alliance base camp, Prince Kael'thas and his men ready themselves to move out.

From the shadows, Dalvengyr commands his Undead Scourge to surround your encampment. Seek out Dalvengyr, destroy him, slay his troops, and raze every last one of his buildings to the ground!

The devastating Undead counterattack has left you in the precarious position of not having a ready supply of gold. You must secure an additional gold mine by destroying a nearby Undead base and establishing a Town Hall over the base's ashes. Dragonhawk Riders will prove valuable in this effort, as their Cloud spell can prevent enemy towers from attacking your troops.

Prince Kael'thas: What news from the front?

Emissary: Apparently the observatories you repaired detected a large undead force massing nearby. Lord Garithos has commanded that you crush the undead before they can march on Dalaran.

Emissary: Unfortunately, your forces may be a little thinned. You see, Lord Garithos has also ordered that all foot soldiers, cavalry and support teams report to the front lines immediately. You men, move out!
The forces in question leave Kael's side and run off in the direction the emissary came from.

Prince Kael'thas: This is preposterous! Am I to assault the undead with nothing but sticks and harsh language?

Emissary: The grand marshal has great confidence in your... abilities. Be creative.
The emissary leaves.

Prince Kael'thas: Those bases are lost. We'll just have to improvise.
Lady Vashj and her naga forces slither out of the nearby lake.

Prince Kael'thas: Greetings, Lady Vashj. I would welcome your aid gladly, but the commander I serve does not approve of your kind.

Lady Vashj: I do not see him here, sharing your peril. Let me bolster your forces with my own. If not, you and your brethren will surely fall.

Lady Vashj: Good. Let's get to it, then.

Prince Kael'thas: You have my thanks, Lady. This victory would not have been possible without your aid, though I fear I may have doomed myself by accepting it.

Lady Vashj: The human you serve trusts no race but his own. His sense of honor runs no deeper than his tolerance.

Prince Kael'thas: It is loyalty and duty that bind me to him and to this... failing Alliance. But now those tenets seem as distant as our ruined homeland. All I know is that my brethren and I hunger for something more.

Lady Vashj: Then perhaps, young Kael, it is time to find a new path... to power and glory.

Prince Kael'thas: I can't explain it exactly, but ever since our homeland was destroyed, my brethren and I have felt empty... almost drained of our spirit.

Prince Kael'thas: There is a hunger now that has... hardened our hearts.

Lady Vashj: I know this hunger, Kael. Like us, your people are addicted to magic!

Lady Vashj: It flowed through your veins for over ten thousand years. And now, with the corruption of your land and the Sunwell that empowered you...

Prince Kael'thas: We have been cut off from our power, from our birthright! Without a new source of magic, my people will surely die.

Lady Vashj: There are other founts of power in this world, Kael. Demons, for instance.

Prince Kael'thas: You speak of madness, my lady. We will never be that desperate.

Lady Vashj: Your aversion is understandable. But still--

Prince Kael'thas: Damn. Vashj, you'd best leave. I cannot guarantee your people's safety.
The naga and blood elves part ways just as Garithos rides out of the nearby ruins with knights and footmen in tow, including some royal guards. One of the knights spots some of Vashj's retreating forces.

Grand Marshal Garithos: Forget about them!

Grand Marshal Garithos: So, Kael, you've shown your true colors at last. I knew you were in league with those serpents. Now I have all the proof I need to execute every traitorous one of you!

Prince Kael'thas: Please, milord, spare my men! It was my decision to--

Grand Marshal Garithos: Save your breath. I never trusted you vainglorious elves. It was a mistake to accept you into the Alliance in the first place. Now, at long last, you'll be dealt with appropriately. Take them away!
The human soldiers bring Kael to the dungeons of Dalaran. Meanwhile, Vashj and her forces watch from the waters outside the city, hidden among the reeds. 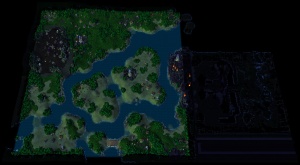