A Delivery for Thorg'izog (Horde)

A Delivery for Thorg'izog
Level: 51 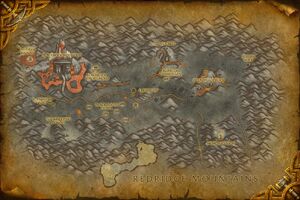 General Thorg'izog is staying among the ogres in the Firegut Furnace, a cave on the western edge of Dreadmaul Rock. I'd like you to deliver this to him and the ogres.

Inside this package, you will find the worg cutlets that you obtained, marinated in the fel slider cider that we took from the Altar of Storms.

I would avoid eating it if I were you.

Bring it to General Thorg'izog. He will make sure that his troops are fed and, with any luck, he will eat some himself.

What've you got there, soldier?

Would you look at that! My favorite soldier comes through in the clutch!

I'll make sure to get this distributed among the ogres.

I'll see you in Redridge, soldier. For the glory of the Blackrock!

[51] A Delivery for Neeralak and

on the ground level of the west side of Dreadmaul Rock. Head in and keep taking forks to the left to find the general.

After completing all three, Eitrigg radios in with