A Destiny of Flame and Sorrow (WC3 NightElf)

A Destiny of Flame and Sorrow is Chapter 6 of the night elf campaign, Eternity's End.

The following evening, deep in the corrupted forests of Felwood... 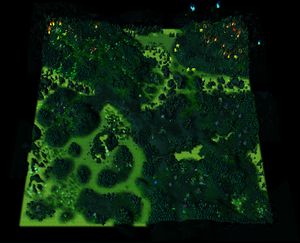 Freed from the barrow deeps, Illidan journeyed into Felwood alone to brood, furious that his own brother believed him to be evil. While ranting that he was determined to prove his brother wrong, that he was free of the demons and powerful, a cold voice sneered at him. Illidan turned to face his taunter, and found himself facing a mysterious human clad in ornate armour and armed with a deadly runeblade. Illidan challenged the warrior to face him and they charged into battle. After an evenly matched duel, Illidan asked the human what he truly desired. Arthas explained that the leader of the undead in Felwood was the dreadlord, Tichondrius. The dreadlord possessed an artifact known as the Skull of Gul'dan, which was responsible for the corruption of the forests. Illidan surmised that Arthas wanted him to steal the artifact, which Arthas justified as serving a master who would benefit from the Legion's downfall. Illidan asked why he should believe a word of this, to which Arthas replied that his master knew of Illidan's hunger for power and that now so much was almost in his grasp. Tempted, Illidan agreed, and Arthas departed to return to Lordaeron.

Assembling an army of loyal elves, Illidan fell upon the demons guarding the skull and slaughtered them all. With the skull in his possession, the demons could no longer corrupt the forest, but Illidan surmised if he were to claim the skull's power for himself, he would become more powerful than any of Archimonde's lieutenants, Illidan 'consumed' the skull's power and became a monstrous beast, half night elf, half demon and imbued with terrible demonic powers. Reassembling his army, Illidan assaulted Tichondrius's compound. The dreadlord was caught offguard by this attack, and astounded when he came under attack from the demonic beast that was Illidan. Though powerful, Tichondrius was no match for Illidan's new-found powers, and he slew the dreadlord with ease.

In the aftermath of the battle, Tyrande and Furion arrived at the compound. Seeing only this monstrous creature before them, Furion demanded to know what the demon had done with his brother. When Illidan revealed his true identity, it was met with horror from Tyrande and disgust from Furion. Though Illidan justified his actions with the death of Tichondrius, robbing the undead of their leader, and assuring that the forests would heal in time, Furion was outraged that Illidan had sold his soul for such power, and told him to be gone from Ashenvale and never return. With a final sneer of "So be it...brother", Illidan departed without a backwards glance.

The Skull of Gul'dan

You must retrieve the Skull of Gul'dan from the Demons. It is the source of Ashenvale's corruption, and its potent Warlock energies augment Tichondrius' already considerable powers.

If the Undead Scourge is to be stopped and the Demons' plans thwarted, the Dreadlord Tichondrius must die. You must use all of your burgeoning powers to destroy him once and for all.

Illidan Stormrage: I am free after ten thousand years, yet still my own brother thinks I am a villain! I'll show him my true power! I'll show him that the demons have no hold over me!
Arthas appears atop a nearby hill.

Arthas: Come then. You'll find that we're evenly matched.
Illidan and Arthas begin dueling, but neither is able to wound the other.

Illidan Stormrage: We could go on fighting like this forever. What is it you truly want?

Arthas: The dreadlord who commands this undead army is called Tichondrius. He controls a powerful warlock artifact called the Skull of Gul'dan.

Arthas: It is responsible for corrupting these forests.

Illidan Stormrage: And you wish for me to steal it. Why?

Arthas: Let's just say that I have no love for Tichondrius, and the lord I serve would... benefit from the Legion's downfall.

Illidan Stormrage: Why should I believe anything you say, little human?

Arthas: My master sees all, demon hunter. He knows that you've sought power your whole life. Now it lies within your grasp! Seize it, and your enemies will be undone.
Arthas departs.

Satyr: Come no further, weakling! Lord Tichondrius commanded us to kill anyone attempting to enter this place, and we shall!

Illidan Stormrage: That is where the Skull of Gul'dan is kept! These paltry demons will not prevent me from claiming it!

Illidan runs up to the skull.

Illidan Stormrage: Now at least the demons will no longer corrupt the forests. But, if I destroy the skull and claim its powers as my own, I will become stronger than any of Archimonde's lieutenants.

Illidan Stormrage: Yes... the power should be mine!
Illidan destroys the skull. It transforms him into a demon.

Illidan Stormrage: Now I am complete!

Tichondrius: What? Who are... you?

Illidan Stormrage: Let's see how confident you are against one of your own kind, dreadlord!

Tichondrius: I'm through toying with you, night elf! Begone from my sight!

Furion Stormrage: Foul demon! What have you done with my brother?

Illidan Stormrage: It is I, Furion. This is what I've become.

Tyrande Whisperwind: No! Illidan, how could you?

Illidan Stormrage: The leader of the undead has been destroyed, and the forests will heal in time.

Furion Stormrage: At the cost of your soul? You are no brother of mine! Begone from this place, and never set foot in our lands again!

Illidan Stormrage: So be it... brother.
Illidan turns around and takes his leave.