A Distraction for Akama

A Distraction for Akama
Level: 70 (Requires 70) 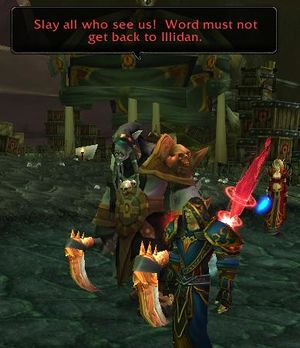 A Player assists Akama and Maeiv's rush inside of the Black Temple.

This is the final quest for attunement to the Black Temple.

Ensure that Akama and Maiev enter the Black Temple in Shadowmoon Valley after Xi'ri's forces create a distraction.

<Xi'ri pulses with lights as the Aldor and Scryer forces around him respond to his orders. Xi'ri's army is ready to push Illidan's forces back and create a distraction for Akama. The naaru awaits your request to begin the attack.>

<Xi'ri pulses with energy as you feel an object materialize in your hands. It is the medallion you gave to A'dal on Akama's behalf, its power augmented by the naaru's magic. The Sha'tar have entrusted you with the Medallion of Karabor, and with it access to the Black Temple.>

I am ready to join your forces in battle, Xi'ri.
Xi'ri falls silent and a quiet tension falls over nearby Sha'tar forces as Xi'ri makes his decision.
Xi'ri begins channeling the powers of the light.

Xi'ri takes 20 seconds to charge up:

Light of the Naaru — Charging the air with the power of the light.
and then applies:

Light of the Naaru — Dealing Holy damage while attacking.
to the Sha'tar forces and the player which lasts for 10 minutes.

The Seasoned Magisters will comment at random as they attack:

Akama, Maiev Shadowsong and his Ashtongue Deathsworn approach the entrance to the Black Temple.

Akama yells: Now is the time, Maiev! Unleash your wrath!

Maiev leads the allies towards the Dreadlords without fear...

Maiev Shadowsong yells: I've waited for this moment for years. Illidan and his lapdogs will be destroyed!
Akama yells: Slay all who see us! Word must not get back to Illidan.

Maiev is ahead of everyone else if you went with her.

The party runs at the Dreadlords and kill them all. Vagath addresses Akama with his last breath.

Vagath yells: You've sealed you fate, Akama. The Master will learn from your betrayal!
Akama says: Akama has no master, not anymore.
Akama says: Our plans are in danger already. It appears Maiev's decided to do things her own way.
Akama's attention shifts to a crack along the temple's southern wall.
Akama says: We must carry on with or without Maiev. Inside! Quickly!

Akama ushers his Ashtongue through the crack, then follows them in.