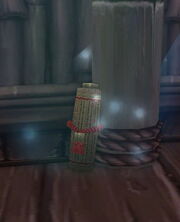 outside the highest building in Halfhill in central Valley of the Four Winds.

On this site many generations ago stood Shen-zin's Sundires, a supplier well-liked by the local farmers. One day the first Pandaren explorer, Liu Lang, walked into the store with a most unusual shopping list, records of which have survived to this day:

Liu Lang announced his intention to explore the world. Shen-Zin, humoring his client, suggested that Liu Lang should also bring an umbrella. He generously offered one for free.

Beaming, a grateful Liu Lang told Shen-Zin, "I shall name my sea turtle after you!" He happily carted away his supplies, whistling as he headed toward the beach, trailed by dozens of curious onlookers.