A New Power in Lordaeron is chapter 6 of the Legacy of the Damned campaign. It was the last battle between the Dreadlord Balnazzar and Lady Sylvanas Windrunner and her allies, for control of the Plaguelands and the Undead thereof.

The next day, on the outskirts of Lordaeron's capital city, Sylvanas and her allies prepare to lay siege to Balnazzar's formidable defenses.

Having broken free of the Lich King's waning power, Sylvanas had turned down the offer to rule the Plaguelands jointly with Balnazzar, Varimathras and Detheroc, as she considered this simply as another form of slavery. She gathered together a small army of free-willed Undead and defeated Varimathras, forcing him to pledge allegiance to her cause. The two of them marched upon Detheroc and slaughtered both him and his retainers, sparing the life of his mind-slave Grand Marshal Garithos so that he could bolster their forces with his Alliance troops. In return for helping her attack Balnazzar, the last and most powerful Dreadlord, Sylvanas promised the egotistical commander control of Lordaeron.

Balnazzar was no fool; he had reinforced the former human capital extensively after ousting Arthas Menethil, and had gathered a very large Undead army to defend it, as well as opening a Dimensional Gateway to summon Demonic reinforcements. He was outraged by his brother's treachery, and promised to respond to Detheroc's destruction in kind.

Sylvanas and Varimathras launched a frontal assault upon Lordaeron's walls whilst Garithos attacked from the rear. The latter was most displeased to find that his Ironforge reinforcements had gotten lost on the way to the battle; Garithos had to fight his way through the wilderness to lead them to safety. Despite the tensions between the commander and his Dwarven charges (who didn't think they were getting paid enough), this action added much needed firepower to Garithos's assault and the Alliance began to make headway against the Undead, forcing them back further and further into the city.

Likewise, despite the terrible magical powers Balnazzar brought to bear upon his foes, Sylvanas, Varimathras and Garithos managed to destroy the Loyalists' and Insurgents' bases, claim their resources and defend their own before storming Balnazzar's base with a two-pronged attack from the front and rear before capturing Balnazzar himself.

Sylvanas ordered Varimathras to kill Balnazzar, as a last test of the Dreadlord's loyalty to her. Despite his protests that the Nathrezim were forbidden to harm one another he eventually did so, or at least seemed to. Garithos then ordered them out of "his" city, and Sylvanas told Varimathras to kill him also, which he gladly did with no remorse. The remains of Garithos's forces were slain or fled. With this final victory, Sylvanas declared herself ruler of the Plaguelands, and renamed the free-willed Undead who had pledged themselves to her the Forsaken.

In fact, whether by accident or design Varimathras did not kill Balnazzar; he later resurfaced disguised as the leader of the Scarlet Crusade. Whilst Ras Splinterspine and Morbent Fell were defeated in this battle, they may have survived if their phylacteries remained intact.

Balnazzar, the most powerful of the Dreadlords, holds Lordaeron in an iron grip. Only with the help of Garithos' army can Sylvanas hope to overthrow the mighty Dreadlord's rule and bring him to his knees, thus establishing her freedom from the Scourge once and for all.

Unlike the rest of Garithos' troops, the Dwarven contingent seems to have gone astray during the march to Lordaeron. If they could be located, their assistance in laying siege to the city would be invaluable.

Varimathras: The capital city is heavily defended. Balnazzar is no fool, my lady. This battle can be won only through attrition.

Grand Marshal Garithos: What's the matter, demon? Are you afraid?

Varimathras: Watch your tongue, human dog. Your hollow bravado does not impress--

Sylvanas Windrunner: Stand down, gentlemen! Save your anger for Balnazzar. Garithos, I'll lead my forces in a frontal assault while you attack the city from the rear.

Grand Marshal Garithos: An aggressive ploy, milady. So long as we get our capital back, I'll stick to whatever strategy you wish.

Sylvanas Windrunner: Give the order. Let the attack commence.

Sylvanas Windrunner: Let's see. I've made one of your brothers my servant, and tore the other to bloody shreds. I wonder what your fate holds, Balnazzar?

Balnazzar: I'll cut out your tongue!

Balnazzar: Ah, my wayward pet, Garithos. I see you've grown a spine since we last met.

Grand Marshal Garithos: Your mind powers tricked me before, demon, but never again! You and I have a serious score to settle.

Balnazzar: You disappoint me, brother. Poor Detheroc must have been stung by your treachery. How dare you call yourself Nathrezim!

Footman: Lord Garithos, our scouts have found the missing band of dwarves! They appear to be lost in the wilderness nearby.

Grand Marshal Garithos: Those brainless dwarves are almost more trouble then they're worth! However, we'll need them on the front lines. I'll have to lead them myself.

Grand Marshal Garithos: Can't you idiots follow simple orders? There's a war on, and you louts are off having a picnic! Get this column rolling immediately!

Riflemen: They don't pay us enough to put up with that asshole.

Varimathras: But I... It is forbidden for one of the Nathrezim to kill another! My defection was one thing, but this...

Sylvanas Windrunner: I require one last test of your loyalty, dreadlord. Do it.

Grand Marshal Garithos: There, your business is done. Now, I want you wretched animals out of my city before I--

Sylvanas Windrunner: Kill him, too.

Varimathras: Gladly.
Varimathras kills Garithos with a Rain of Fire. The marshal's corpse is immediately devoured by ghouls.

Sylvanas Windrunner: The capital city is ours, but we are no longer part of the Scourge. From here on out, we shall be known as the Forsaken.

Sylvanas Windrunner: We will find our own path in this world, dreadlord... and slaughter anyone who stands in our way. 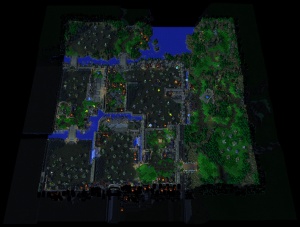