A Steamy Romance Novel: Forbidden Love can be obtained by pickpocketing humanoids in Northrend. Additionally, Martar the Not-So-Smart in Jade Forest drops it as well. 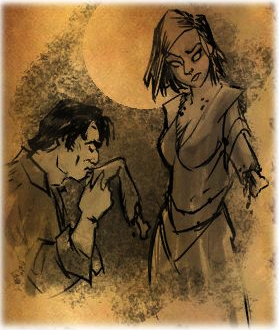 Ah'tusa crept silently through the massive underground tunnel, nervously looking over her shoulder in anticipation of the fast moving tram. "Where is he..." she muttered angrily. Stopping suddenly as something moved behind her. Her eyes narrowed dangerously as her dagger slid from its sheath.

A husky voice echoed in the hollow chamber, "I thought rogues liked to be behind their target." She spun quickly, driving her blade into the shield of impenetrable force. "And I thought paladins were supposed to be chaste," she replied with a confident smirk.

Leaning forward, she counted out loud until the invisible bubble dissipated with an audible pop. "Twelve seconds? I know you have abilities that last longer than that."

Bony fingers worked effortlessly beneath his armor, unlatching his breastplate and exposing him to the cold air. "Don't worry my sweet Marcus, that's not a finishing move tonight... I'm just getting started." He wrapped his arms around what remained of her waist, forcing an excited giggle as he nibbled at her neck vertebrae.

<The rest of the book has several sections that are apparently worn out from repeated readings.>