A Steamy Romance Novel: Got Milk?

A Steamy Romance Novel: Got Milk? can be obtained from humanoids in (mostly) Highmountain as a drop.

A Steamy Romance Novel: Got Milk? 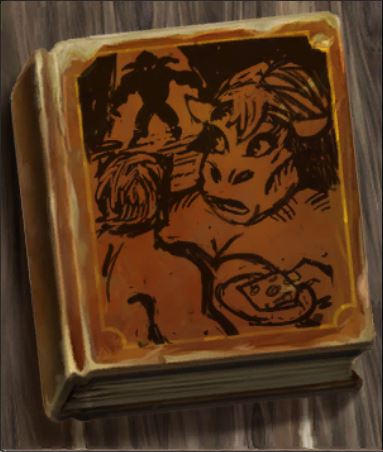 "So there I was, surrounded by at least a hundred murlocs!" the heavy mustached man proclaimed, gesturing in a wide arc.

The tawny tauren gasped in amazement. "what ever did you do?" Her voice had a brawny, muscular tone to it.

"The only thing I could do my lovely." Marcus patted the sword resting on his thigh. "I brought them to justice!"

"Oh! With just a dagger? You are so brave!" Tanda cautiously reached for the blade, but pulled her hand away at the last second.

Marcus bristled. "What? This is a two-handed sword, enchanted to the hilt. Perhaps not as big as you've seen, but I know a few tricks to really make it sing,"

Tanda smiled demurely, fluttering her enormous eyelashes. She picked up one piece of cheese and held it close to Marcus's lips. "Try this, it's homemade."

Tanda place the cheese back in the bowl. "Oh. are you sure? Does that mean you can't tolerate me?" The buxxom tauren stepped forward, pressing herself against Marcus. The substantial height difference placed his face squarely in her chest. unable to see, he flailed in protest, finally finding purchase on her firm backside -- his muffled apologetic sounds only made her giggle and squeeze him more tightly.

Just as his other hand found her tail, the light dimmed as an imposing figure moved into the doorway ""What the..."

Marcus pulled his head away and gasped for air, looking at the angry tauren with wide eyes. "It's not what it looks like!"

Bax charged, ramming into Marcus while uttering his challenge, "You mess with the bull, you get the horns!"

Marcus reeled and caught himself, digging his heel into the dirt. Seizing a horn in each hand, he held the tauren's head down, fighting against his tremendous strength. Bax forced his head up, grunting and spitting in anger, only to have it repeatedly pushed down. They locked eyes for a moment, and with a final heave of explosive force, Bax wrenched himself free.

The powerful tauren swung his arms out wide, as if to crush Marcus in a mighty hug. "Blades of light!" proclaimed the paladin. A huge, pulsating sword thrust up from the ground between the two combatants, tearing through armor and clothing, searing the thick chest hair of Marcus and cutting a fine line into the tauren's muscular chest.

Before they could move again. Tanda raised her hooved leg into the air and brought it down with warlike force. The man and the bull wobbled, clearly stunned. "Stop it. both of you!"

Marcus regained his composure and looked at Tanda, and then to Bax. Fur was ruffled and the bare parts of their leathery skin glistened with sweat. As they all stared one another down, the rediculously good-looking Marcus spoke. "Well, since we're mostly undressed already..."

<The story goes on, but your good taste prevents you from reading it.>