A Symphony of Frost and Flame (WC3 Undead)

A Symphony of Frost and Flame is the final chapter of the Legacy of the Damned campaign. It was the final battle between the Lich King's Scourge led by King Arthas, and Kil'jaeden's agents led by Illidan Stormrage.

The key to Ner'zhul's tomb is controlling the four ancient Obelisks surrounding Icecrown Glacier. Illidan's forces already vie for their control. Destroy the forces guarding the Obelisks, and bring Arthas to the nearby Obelisk Circles to capture them. 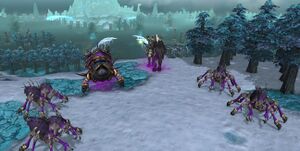 Arthas and Anubarak prepare their forces

King Arthas: Time's running out, Anub'arak. We've got to get inside the Throne Chamber before Illidan does.

Anub'arak: The Throne Chamber lies within the frozen peak at the center of the valley. It can only be opened by activating the four enchanted obelisks that surround it.

Anub'arak: Illidan's forces have already entrenched themselves near two of them.

Anub'arak: We'll need to drive them back and reactivate the obelisks ourselves.
Meanwhile, Lady Vashj and Prince Kael approach Illidan at his base.

Lady Vashj: We're sorry to interrupt your meditation, master, but all our forces are in place.

Prince Kael'thas: Once the chamber is opened, we will destroy the Frozen Throne as promised!

Illidan Stormrage: Then the hour has come at last. After today, the Scourge will meet its end. Can you hear me out there, Arthas? Its end!
Arthas and Anub'arak are watching the situation from above.

King Arthas: Illidan has mocked the Scourge long enough. It's time we put the fear of death back in him.

King Arthas: I've reached the first obelisk! It will take me a few moments to activate it. I'll need protection while I work.

King Arthas: This obelisk has been activated! We've got to push on!

Anub'arak: The obelisk is now active and under our control. However, Illidan will likely try to take it from us. We must defend this point at all costs!

King Arthas: You look different, Illidan. I guess the Skull of Gul'dan didn't agree with you.

King Arthas: Are you still upset that I stole Jaina from you, Kael?

Prince Kael'thas: You've taken everything I ever cared for, Arthas. Vengeance is all I have left.

The doors of the Throne Chamber swing open.

King Arthas: We've done it, Anub'arak! The Throne Chamber is open! This is the hour of the Scourge!
Before Arthas can get there, though, Illidan runs to block the door with himself.

King Arthas: The Frozen Throne is mine, demon. Step aside.

King Arthas: Leave this world and never return. If you do, I'll be waiting.

Illidan Stormrage: I've sworn to destroy it, Arthas. It must be done!

King Arthas: You are a pitious creature, Illidan. You don't even deserve an honorable death.

After forcing their way past the horrors of the dark catacombs of Azjol-Nerub, Arthas and Anub'arak rendezvoused with their army at the peak of Icecrown Glacier, with the intention of claiming the Frozen Throne in the name of Ner'zhul. They were dismayed to find that Illidan's forces had already arrived, were well entrenched around the pinnacle of ice which contained the Lich King, and were poised to claim the four Icecrown Obelisks which when activated would open the prison. Final defeat for Arthas and Ner'zhul seemed all but assured.

Arthas and his army quickly wiped out a small naga outpost to the south west of the Frozen Throne and used the resources gathered from the ruins of Azjol-Nerub to establish their own base. From there Arthas and Anub'arak launched their attack against Illidan, Prince Kael and Lady Vashj. The battle raged back and forth across the glacier, with both sides taking and re-taking each of the obelisks. Although the undead were outnumbered, the biting cold and Arthas' considerable military prowess eventually turned the tide against Illidan. The blood elves and the naga were routed, and Arthas claimed all four obelisks, allowing him to approach the Frozen Throne. In a last desperate effort to stop him, Illidan confronted the death knight at the entrance; after a short fight Arthas cut the betrayer down, leaving him badly wounded in the snow. The Scourge had triumphed.

Arthas destroyed the Frozen Throne, and merged with Ner'zhul to become the new Lich King. From his Icecrown fortress, the Lich King made plans to rebuild his forces and conquer the rest of the world. Illidan was apparently driven mad by the encounter; he crawled back to Vashj and Kael, who retreated with their remaining forces back to Outland. He brooded in his Black Temple until a brave band of adventurers, assisted by Maiev Shadowsong and Akama, finally killed him, ending his reign over Outland. Later, in Icecrown Citadel, the Lich King was finally slain by another band of adventurers assisted by Tirion Fordring and King Terenas Menethil, ending Arthas's reign and the Scourge once and for all. Bolvar Fordragon eventually became the new Lich King and now commands the "new Scourge" from the Frozen Throne. 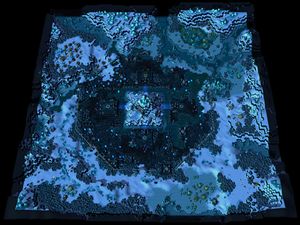