A turtle made it to the water 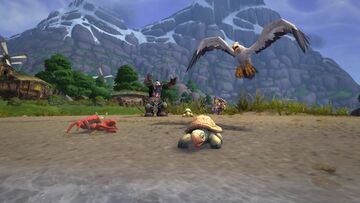 A Dark Iron dwarf trying to help a turtle make it to the water.

[120WQ] Beachhead" throughout Zandalar and Kul Tiras. This world quest, which is narrated by Scrollsage Nola, has the player shoot down albatrosses and crabs to protect young Juvenile Turtles and help them reach the water. Most of the turtles, due to their predators, would, sadly, not make it to the water, since the cycle of life can be cruel. However, the players change this cycle by allowing (mostly) every turtle make their way to the water.

Since the release of Battle for Azeroth, this particular line from this world quest has already become a popular meme in the Warcraft community. These little turtles have generated a plethora of content around the internet, including a music video. The Warcraft twitter account tweeted an instance of this meme. By the time of BlizzCon 2018, players had helped a total of roughly 760 million turtles make it to the water.[1]

[120WQ] The Cycle of Life was added to help keep the balance of life, where the player plays as a crab to kill twenty turtles while avoiding the magic bombardments.

Wowhead took the time to dig deeper into the quest itself. They submitted a question to Greg Street, the former Lead Systems Designer for World of Warcraft who, before starting his career in the gaming industry, was also an oceanographer, with a Ph.D. in marine science.[2]

Battle for Azeroth added a new World Quest called Beachhead. This quest, offered by the new Tortolan faction (tortoise-esque humanoids), asks you to protect juvenile turtles as they made their way from their nests to the water, which means you end up having to kill wildlife predators like seagulls and crabs. Being an oceanographer, Do you have any insights on the impact of doing such task in mass would cause? Both increasing the turtle population and reducing the predatory one?

Azeroth has its own ecosystem (where crabs have six legs, whale sharks have giant teeth, etc.) so real world examples may not apply.

In the real world, seagulls are thriving and crabs are generally doing fine, while 6 of Earth’s 7 sea turtle species are endangered. The causes include habitat loss (including light pollution), the fishing industry (which doesn’t often target turtles but still catches plenty), and garbage in our oceans. Those three factors are directly related to humans. So, pretty much sea turtles need all the help they can get.

Looking at ecology at large (not counting turtles specifically), removing predators can often cause a population explosion of prey species, especially prey that evolved with high reproductive rates to overcome high predation pressure. Witness the explosion of urban deer in the USA because wolves and mountain lions are at much lower populations than they were historically.

Other species are more limited by available food or habitat. I suspect in the case of turtles, that their populations could never get that large because of these other factors. There are only so many beaches in the world upon which to lay eggs, and only so many jellyfish in the ocean to eat. There are reports of early Europeans arriving on wooden ships being kept awake because of the number of turtles bonking into their hulls all night, so clearly they once were much more abundant.

Caveat: I haven’t been an oceanographer for about 20 years now, so my understanding of some of these issues could be outdated.

With that, the conclusion we can take is that we're performing a good act to the environment as we help 🐢 A 🐢 TURTLE 🐢 MAKE 🐢 IT 🐢 TO 🐢 THE 🐢 WATER 🐢.