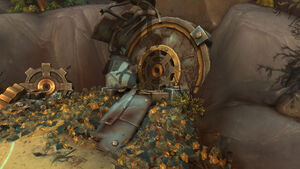 One of the mysterious doors.

also called the Rusted Vault, is a former gnomish location found in Tiragarde Sound, east of Vigil Hill. Something drew all the gnomes of Boralus here before they mysteriously disappeared, leaving only the sentry bots behind. The gnomes that arrived to build Fizzsprings Resort have no idea what happened to their kin.[1] The entrance to the Forgotten Vault is located here.

In Drustvar, there is a stone that describes a battle the Drust had with smaller beings that resembled gnomes in stature.[2] They were likely the gnomes or mechagnomes that inhabited Kul Tiras before they disappeared.