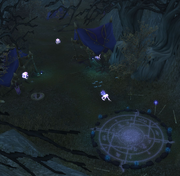 Located in the craggy hills just to the west of Karazhan, on the border with Duskwood, the Abandoned Kirin Tor Camp is, as the name suggests, a Kirin Tor camp that has been abandoned. Level 100 Arcane Hunters and Excited Mana Scavengers roam around. An old circle of power is still there.

The camp was used an unknown number of years prior to the First War by Arrexis, a member of the Council of Tirisfal who was researching Karazhan. Arrexis found a way to stop the warping of space caused by the tower from happening within special wards, but while bringing the wards up reality was weakened. Medivh, who was possessed by Sargeras and secretly killing members of the Council of Tirisfal in "accidents",[1] encouraged Arrexis to try his ritual on demonic realms. Arrexis caught the attention of the eredar Balaadur. The catastrophe ended with Arrexis and all of his apprentices dead, Balaadur taking

[Ebonchill], Daio exiled from the Kirin Tor for his part in it, and all records of Arrexis stripped from Kirin Tor records so that no one would repeat his mistakes.[2]

Merina was among the apprentices to come here with Arrexis.