For other uses, see Abomination (disambiguation). 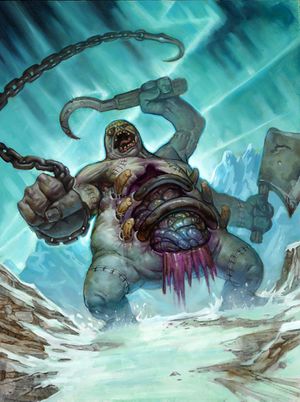 Abomination from the TCG.

Abominations are twisted, mutilated undead creatures comprised of multiple dead limbs and body parts from many different corpses. They are enormous warriors, scarred by loose stitchings and putrid, open sores. They love to carve flesh and tear their enemies apart. The slow-moving and dull-witted abominations constantly drip blood and smell like disease-ridden slaughterhouses. They carry large cleavers into combat and wield various sickle-bladed hooks on their disproportionate limbs.[1]

Almost all abominations lack any real intelligence, having an I.Q. closest to that of an ogre on average. Abominations outwardly appear strangely joyful due to their absent-minded expressions and mannerisms, though this is most likely due to their low level of mental capacity. Like their undead cousins, abominations lust for flesh and are known to eat not only the living but the dead as well.

The abominations were created by Kel'Thuzad,[2] and as such are mainly found in the Scourge's and Forsaken ranks. While for the Forsaken the abominations are primarily kept as guards, some have become highly regarded Forsaken representatives in the military such as Lieutenant Murp of Alterac Valley. However in patch 2.4.0 he was removed from Alterac Valley and is now in Wintergrasp. Some of the places where abominations are known to have been built are Undercity, the Fleshwerks[3] and the Plagueworks. Although abominations were once guards in Undercity, they have been replaced with the Kor'kron Guard, after the Battle for the Undercity. After the Siege of Orgrimmar, Undercity Guardians once again replaced the orcish Kor'kron.

Abominations are built out of multiple corpses of the dead,[4] requiring blood and embalming fluids to preserve the parts and keep them functioning.[5] According to Calder Gray, the "abomification process" causes significant brain damage so it's best to start with someone smart when selecting a brain for the construct. The secret is to leave the reptilian nervous systems intact while removing the higher cognitive functions to avoid the abomination developing a conscience or remembering the allegiances of the brain's original owner.[6] An abomination also requires a heart strong enough to pump sludge through its rat's nest of veins.[7]

The first abominations were created in the catacombs of Scholomance from unearthed corpses that were hacked apart and pieced together.[8] The abominations of the Third War were usually assembled in slaughterhouses which can still be found in the Eastern Plaguelands. Opposing the Scourge, however, the Forsaken abominations are made in the Apothecarium of the Undercity and are possibly composed of the parts of humans that are in the captivity of the Forsaken.

In Maldraxxus, the corpses of the slain are brought to the House of Constructs, where the finest pieces of flesh and bone are skillfully assembled into a new form. These reanimated monstrosities are given new purpose in a body that is greater than the sum of its once separate parts.[9]

An abomination in Warcraft III 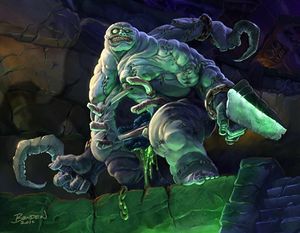 Vilegut, an abomination in the TCG.

Important Scourge abominations include Glutton (a constantly hungry abomination found in Razorfen Downs), Ramstein (the ruthless guardian of Baron Rivendare's slaughterhouse in Stratholme) and the titanic Patchwerk (whom Kel'Thuzad uses as his "Avatar of War").

[Weebomination] has a chance to drop from the 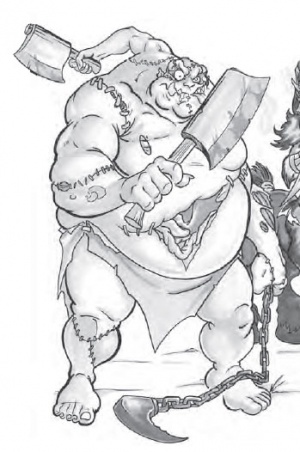 Abominations are undead, ogre-like creatures, mounds of corpses cobbled together. The stomach-churning reek is choking, and a green-brown haze surrounds them. Their guts spill from a jagged gap in their stomach, and flies buzz about it, feasting. Three disproportionate, arm-like limbs emerge from their bloated body, two bearing bloody cleavers, and the other a thick chain with a hook on the end. Their tongues are thick and round and dangle from between crooked, yellow teeth.[10]

Abominations are large created creatures, similar to flesh golems. Mutilated bodies and limbs from many creatures combine into a single twisted, hideous form. A viscous trail of blood leaks from it with each laborious step, and the ripe decay of the slaughterhouse wafts from its body. These magically created automatons are incredibly powerful, possessing (literally) the strength of ten human men. Constructing one requires a great understanding of necromancy and science and the capacity to both animate undead and cause magical healing to living flesh. They are difficult to create, but once made they are fanatically loyal servants and tremendously powerful warriors. The twisted, mutilated bodies of abominations are comprised of multiple dead limbs and body parts from various corpses. These enormous warriors love to carve flesh and tear apart their enemies. They carry large cleavers into combat and wield various sicklebladed hooks on their disproportionate limbs. The animating force of an abomination is a blasphemous conglomeration of the souls incorporated into the corpses that make up the abomination's unliving flesh. This creature is a singular entity with a united soul and, because of this unique makeup, is considered both an undead creature and a construct. It is certain that the abomination remembers nothing concrete of its previous lives, although snatches of memory occasionally plague the beast at times of great stress or unusual pressure.[11]

They are slow of body and mind, but tough and strong — excellent troops for the Scourge and the Forsaken. Disease spreads about them in visible clouds, but their enchantments ensure that, while they rot, they remain horribly alive. Abominations are some of the most powerful undead creatures in Azeroth. The Forsaken use them to guard Undercity and the Scourge employs them in a similar role. While not speedy, they are excellent at staying in one area and pounding anyone who gets close. Abominations understand Common and speak it…sort of.[10]

Abominations are fearless, tenacious, and resilient, capable of pressing their advantage in combat for hours at a time without growing weary or weak. Their strength and ability are based on their unusual construction — they truly are more powerful than ten ordinary human men. Although mostly mindless creatures, they do occasionally show a flash of insight, modifying their orders to be more advantageous (such as attacking the most powerful opponent first when commanded into a battle). They are not particularly intelligent in most cases, however, and relying on an abomination's sense of tactics is an exceptionally poor idea.[12] Abominations' dim brains don't allow much room for tactics. They follow their master's orders, trundling to where they are supposed to trundle and then hacking and ripping until their opponents are no longer recognizable.[10] 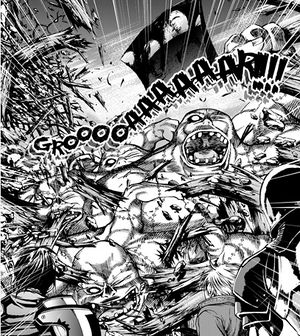 Abominations are large, strong, virtually brainless amalgams of animated corpses. The Scourge created them from bits and pieces of various corpses, and they served as powerful troops in the Third War. When the Forsaken split from the Lich King's control, they took a number of abominations with them — and, so some say, the ability to create more. Forsaken abominations guard Undercity and perform various tasks for their masters. Abominations love ripping and tearing apart living creatures. They also are breeding grounds for disease, and clouds of flies and putrid sick surround them. Their rotting guts hang from gashes in their stomachs. All of these traits make them poor traveling companions, and most who must deal with abominations make sure they do it from a distance. Abominations are also exceedingly dumb, but they possess enough intelligence for rudimentary problem solving and task resolution. They don't possess much in the way of emotion, though. They have four basic states: pleasantly standing around and waiting for orders; being impatient that they aren't killing things; feeling happy because they're on their way to kill things; and being ecstatic when they're actually killing things. If asked to do anything more — for example, to run an errand for its master — an abomination becomes confused. It wants to please its master — that's why necromancers originally created them, after all — but tasks that don't involve ripping take brainpower that most abominations don't possess.[13] Gordo's Task is an example of this.

For all these reasons, few abominations are adventurers. An abomination on an adventure is probably a guard or servant for another adventurer — and it serves well (if a guard) or middling (if a servant) in that capacity. An abomination adventuring without a master is unheard of, but not unbelievable. If an abomination takes it into its head to go exploring, few are going to stand in its way. Such creatures likely strike out on their own, or perhaps with Forsaken allies who tag along. An abomination's disease cloud means that any living creatures who attempt to venture with it have to remain far away, or be possessed of remarkably hearty constitutions.[14]

An abomination is created from the mutilated and disease-ridden corpses brought from the battlefield. It stands over 8 feet tall and weighs well over 500 pounds. The skin of an abomination is a sickly green and yellow, obviously covered with disease and twisted with horrible magics. It has no possessions and carries only the items given to it by its creator. It includes the dissection of more than 10 bodies to be used as the abomination's flesh and organs. Each of these bodies must be infected with the Lich King's plague, so that they will properly mutate when affected with the rituals to create the abomination proper.[15]

A golems creator, any necromancer of Ner'zhul, or any death knight can command an abomination if it is within 60 feet and can hear and see its creator. If left to its own devices, the abomination will make the best of its situation, carrying out its last order to the letter until it is no longer capable of following that directive. The creator can also give the abomination a simple directive to govern its actions while the creator is not in the area, such as: “Attack all who enter here” or “Remain here, and do not allow the chest or its contents to leave this room.” Because abominations do not need to breathe and are immune to most attack forms, they can continue to fight even when the terrain is exceptionally dangerous (underwater, for example) or difficult.[12]