Kill 5 Blackrock Sergeants using the Blackrock Cudgel of Discipline. Defeat them quickly, before they have a chance to unmask you. 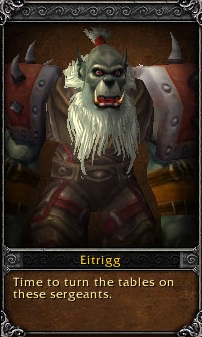 It sounds like you have earned Thorg'izog's trust, and he's assigned you to discipline duty. This is fortunate.

We need you to take out his sergeants. You'll find them on wolfback, outside the Blackrock Stronghold in the Fields of Honor. Use that cudgel on them, several times, until they die. You'll have to act fast, because if they realize you're not one of them, they can unmask you. Strike quickly and ferociously, <name>.

Without those sergeants, Thorg'izog will be hard-pressed getting his troops ready for battle.

Already the dominoes are beginning to fall, <name>.

Before leaving Thorg'izog's postion after accepting

[51] I Am the Law and I Am the Lash, Eitrigg radios in with this quest. Accept it before getting started. Once you hit a sergeant you only have a few seconds before he unmasks you, so unload.

You've been spotted! Club your target to death before you are unmasked!

The quest completes automatically after the fifth sergeant is killed.