The Abyssal Maw, also known as the Plane of Water,[1][2][3][4] is one of the four interlinked domains within the Elemental Plane, occupied by the water elementals. 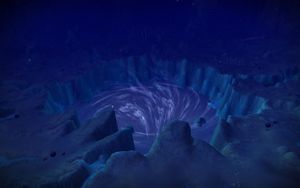 The Abyssal Breach the entrance into the Abyssal Maw in Vashj'ir. 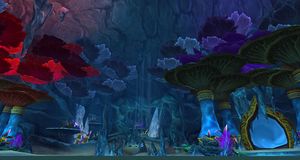 In World of Warcraft it is a dungeon hub called Abyssal Maw: Abyssal Maw and located in Vashj'ir. It contains one 5-man instance, Throne of the Tides, for level 80-81 players and was revealed at the official Vashj'ir preview.[5]

Azeroth's native elementals wreaked havoc across the world while they were under the influence of the Old Gods.

To keep Azeroth safe from these threats, the titans imprisoned the Old Gods underground and banished the savage elementals to the titan-constructed Elemental Plane, a secure dominion where the elementals could dwell without harming Azeroth.

Four domains were created within this primordial realm to serve as ideal environments for each type of elemental. For ages since, the elementals of air, water, earth, and fire have engaged in endless strife with each other, waging titanic battles in the confines of their realm. One of the Elemental Plane's domains, a vast ocean known as the Abyssal Maw, is home to the water elementals. Legend says that Neptulon the Tidehunter, the powerful being who rules over the aquatic realm, possesses a potent weapon that allows its owner to control the very seas of Azeroth. Thus far, the artifact has remained secure inside the water elementals' domain... but that will soon change.

Within Deepholm, the domain of the earth elementals, the malefic Dragon Aspect Deathwing is on the verge of executing a catastrophic act: to burst forth from the Elemental Plane into Azeroth. Doing so will ravage the surface of the world and breach the barrier that separates Azeroth from the elementals' realm. Whether Neptulon and his subjects have entered into an alliance with Deathwing remains unknown. Regardless, if Deathwing's actions create an opening into the Abyssal Maw, nefarious and honorable factions alike will seek out the fabled weapon carried by Neptulon. Whoever secures the artifact will have control over the world's seas, a power that perhaps no one, not even members of the Horde or the Alliance, should possess.

[Sharas'dal, Scepter of Tides] after his friend Wavespeaker Adelee went missing there while looking for it. The naga, still within the Throne of the Tides, were torturing a sea giant named Grash which was promptly freed, who informed them that a naga named Lady Zithreen is using the Scepter to control the sea giants, makrura, and other residents of the seas. Erunak demands to know from Zithreen what Azshara's plans were for the Abyssal Maw during the events in Vashj'ir, but Zithreen does not tell him and Grash kills her.

Surrounding the land and constantly assaulting it with waves and storms sprawls the great ocean of the Elemental Plane. The water is vast and in many places very deep, sometimes nearly reaching the realm of fire far below. The liquid itself is constantly changing — sometimes salty or murky, other times fresh and clear. Creatures of the element abound, along with some large beasts such as the kraken, but the seas are otherwise curiously devoid of life.

Neptulon the Tidehunter lives within the depths of the seas, jealously protecting his realm from any threat. His kingdom is called the Abyssal Maw. He constantly battles with Ragnaros the Firelord, who is always trying to break through to smite the ocean with his heat. The Tidehunter keeps the seas surging and in constant motion, battering at the earthly realm with waves and storms. A wise and powerful being, Neptulon keeps many secrets, for reasons only a creature of water can truly understand.

The surface of the Elemental Plane's ocean is dotted with a few small islands of rock that yet resist Neptulon's endless assault on the land. At the point farthest from Therazane's domain there floats a mile-wide shelf of solid ice known as the Frostland. Like an immense iceberg, the Frostland extends far underneath the surface, almost to the ocean floor. Smaller chunks of ice break free occasionally and drift across the seas, slowly melting as they come nearer to Deephome. Some of these bergs are occupied by ice elemental conglomerates or other creatures.

Traveling beneath the waves, within the Abyssal Maw itself, can be troublesome, and not just because of the need to breathe underwater. Vortices occasionally form of their own accord, creating tremendous tidal forces that threaten to tear apart their victims. Violent temperature shifts also move upward through the waters like bubbles rising from the ocean floor, subjecting travelers to bone-numbing cold. Parts of the Abyssal Maw are thousands of feet deep — so far down that even light doesn't reach the ocean floor. Traveling beneath the surface in these areas subjects travelers to intense pressure.

Traveling on the surface of the Abyssal Maw can be very dangerous. Visitors rarely have cover, and Neptulon will have no trouble spotting unwelcome travelers. Furthermore, both Neptulon and Al'Akir contest the border between the Maw and the Skywall, so anyone floating upon the waves can be subjected to the attacks of either realm.[6]