Academy of Arcane Arts and Sciences 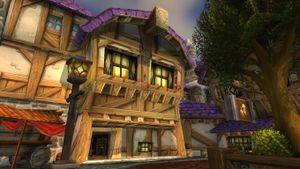 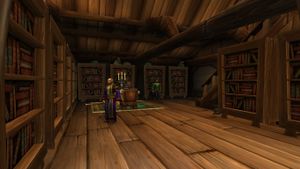 The library's interior and collection of books

The Academy of Arcane Arts and Sciences[1] is an institution of mages based in the human capital city of Stormwind. The academy's membership consists of various mages and scholars with desires to further their knowledge and subsequently train to do so. A library in the Canal District[51.6, 74.6]

serves as part of the academy's campus, consisting of a two-story building and containing a sizeable collection of tomes. This library stores important texts such as

[Khadgar's Essays on Dimensional Convergence], Archimonde's Return and the Flight to Kalimdor, and

[Mount Hyjal and Illidan's Gift]. Adair Gilroy is the academy's librarian, while Mazen Mac'Nadir apparently takes care of the tomes in the library in a more magical sense.[2]

The entrance to the library can be found near the Stormwind Stockade building, on the northern face of the Mage Quarter. 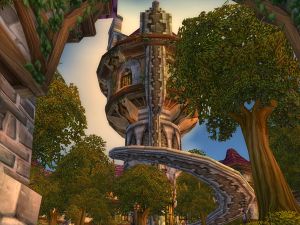 In the non-canon RPG, the Academy of Arcane Arts and Sciences is the Wizard's Sanctum.

The RPG refers to the tower that contains the Wizard's Sanctum as the "Academy of Arcane Sciences",[3] perhaps implying that the tower itself is the academy.

The tower is a vine-covered tower that sits to the west of Stormwind City. For a long time, the Academy was considered to be a second-best school of magic compared to Dalaran, but since that region's destruction by the demons and undead, the northern mages fled to Stormwind and took up residence in the tower. It's full to bursting with mages, and some say it's difficult to get a word in edgeways with the differing opinions inside. Yet as it's the only magic school left in the east, few complain openly.[3]

They wish to speak with Theocritus.[4]