For the goblin on the Lost Isles, see Ace. For the addon system, see Ace (AddOns).

An ace is a flying fighter or a bomber pilot[1] credited with shooting down several enemies during aerial combat. 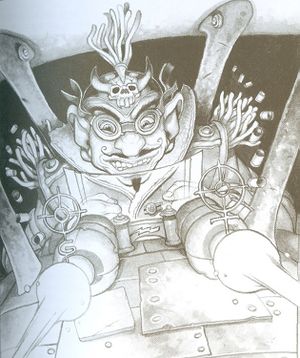 As the saying goes, any tinker can pilot a vehicle, but only the truly gifted can be the vehicle. The thrill of high-flying combat sings to a particularly few foolhardy types, who forgo all worldly pursuits to become one with their vehicles, flying barons of destruction. These few brave and exemplary souls are known as aces.

An ace is a master of the wheel, a vehicular expert with no equal. The thrill of the dive-bomb - the rush of wind past his goggled face, the roar of the phlogiston engines beneath him, these are the things that give life meaning to aces. While the ace is a master of any vehicle he can get his hands on, the ace is truly free only while in the air. Throughout his training, the ace gains sharp wits and quick hands, and even outside the cockpit he is always on the verge of moving. Every action is graceful, every word sharp and cocky, and his eyes forever look toward the horizon. For the flyboys of the world, every day is a new experience, and every moment on the ground is wasted when one could be soaring in the heavens.

By large, aces are members of the Alliance. Gnomes and Ironforge dwarves create some of the slickest, meanest aerial machines Azeroth has ever known, and in all three wars they proved their mettle again and again. Aces proved their worth in the Third War, where they dished aerial death to enemies of Stormwind and Lordaeron from atop their steam-powered vessels; many aces claim that, without them, the end of the war would have been quite different. In times of relative peace, the Alliance aces still fly sorties when needed, and often enlist as guards escorting cargo over aerial pathways.

A large part of the aces, like the renowned Gaevel Thunderblast, are also trained in the arts of fighting on the ground, and while the sword is not a favourable weapon for the aces, most of them practice martial arts.

Many goblins also find the path of the ace irresistible, plying their madness-enhanced skills while piloting upgraded war zeppelins and other aeronautical nightmares. At least one notable goblin ace spreads fear in the airways of Kalimdor via an intricate rocket pack strapped to his back and several mounted weapons. Most goblin aces, unfortunately, turn into deadly aerial pirates for Ratchet. These buccaneers of the air inspire terror over caravans, keeping guards near the east coast of Kalimdor looking to the sky.

Whether mercenary or enlisted, the ace attempts to stretch and break the boundaries of his skills, seeking other aces to prove that he, alone, is the greatest pilot ever. This tendency forces many an ace to travel the world in his vehicle, stopping only in bars to brag about his exploits, or repair shops to correct the inevitable wear and tear he puts his machine through. Many aces hold personal contests or issue proclamations of talent; and more than one city hosts fairs where aces of different generations, races and talent come together in epic contests of skill.

Adventuring provides aces with "exercise," a chance to hone their skills and possibly earn some money to upgrade their crafts. Most aces take advantage of a special technological device or a spell or magic item to bring their vehicles with them. Some even cobble together tank treads or other devices, grounding their vehicles to go underground.

Understandably, aces get along best with tinkers, as they themselves must have some experience as tinkers to understand and control their vehicles. While most quickly abandon the art of tinkering for more martial pursuits, they recognize the skills of other tinkers in designing and upgrading the next greatest ship. Often an ace has a small group of followers, at least one a dedicated aeronautical engineer who forever tinkers on his idol's prized machine, and defends his master's honor whether he needs it or not.

Aces also respect the prowess of warriors and barbarians, seeing them as ground-bound cousins. Aces hold a general distrust of magic and its users, though not as great a distrust as other tinkers do. They can certainly see the usefulness of a well-placed healing aura or fireball from above, however, and many larger ships have a mage or priest, to serve as medic or artillery as needed. Aces take other classes on a case-by-case basis. While many observers on the ground think aces should get along with windwarriors, the two masters of the air often fall into clashes over which is superior.

An ace is a master at piloting any vehicle he gets his hands on. The ace learns how to fire on the move while piloting a vehicle. The ace can pull himself out of danger with ease while flying.

A skilled ace has mastered the techniques of aerial defensive fighting, also known as dogfighting. This applies even if the ace is flying under his own power, such as from a fly spell or a rocket pack or the like. A skilled ace learns how to maximize the effects of vehicular combat. An ace deals an extra damage with integrated vehicle weapons and with explosives dropped, thrown or fired from vehicles. A skilled ace’s knowledge of vehicles allows him to exploit the weaknesses in their construction. The skilled ace increases the maneuverability of any vehicle he pilots.

The highly skilled ace learns how to maximize his engine’s output, gaining a short burst of speed when he truly needs it but damaging his engine in the process. Afterward, his vehicle’s speed drops by –20% for 1 hour. This speed reduction cannot be repaired.[2]

Lords of the Sky