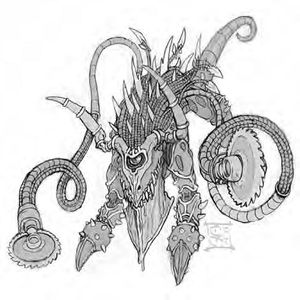 The creature looks vaguely like a gleaming, metallic hound — though one with a massive, toothy head that makes up nearly a third of its length. Great horns jut from above a single eye in the center of its forehead.

Adamantine stalkers use simple tactics. They leap and pounce as often as possible in direct assaults against the targets designated by their owners.

An adamantine stalker's body is constructed from fitted iron bones. The entire creature is then submerged in pure molten adamantine when nearing completion.[1]