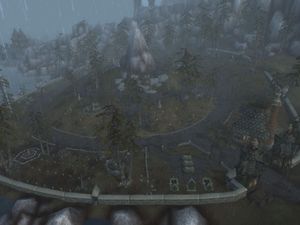 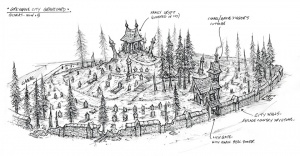 Aderic's Repose is a cemetery in Gilneas located outside of the city to the west, not far from Keel Harbor to the north. The Undertaker's Pass that begins in Greymane Court, crosses under the Northgate River and exits in small house in the Repose. Aderic was an unknown Gilnean referred to as a "patriarch" (possibly a king).

The location is a cemetery with a memorial hill, a gate, and houses. If you follow the hill in the center with the winding path you will come upon a small house, which appears to be a "funeral home".

Outside of the funeral home, is caskets and bodies in mummified wrap that are burning. Possible reasons that the bodies are burning are of the one or more of the following: Forsaken plague warfare, the worgen curse, too many dead in recent days to bury them all, and/or not wanting the Banshee Queen to resurrect the bodies.

Just inside the funeral home are stairs that lead to a long crypt hallway, known as (but not marked as) the Undertaker's Pass,[1] that follows into what appears to be a fishing trainer and/or supplies shop located within Greymane Court. It is possible that the tunnel is used as a way to cart the dead from the city in secrecy.

At the top of the hill lies Aderic's Tomb. Liam Greymane was seemingly laid to rest in a coffin in front of it.[2]

Only during the starting area: