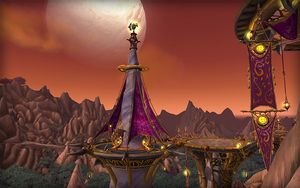 Skyreach, the Adherents' seat of power.

The Adherents of Rukhmar were a religious order that ruled high arakkoan society with unyielding fanaticism.[1] These flying followers of the sun goddess Rukhmar were based in Skyreach, atop the Spires of Arak, and came to power when they overthrew the beloved Talon King Terokk out of jealousy. Sunwalker Dezco calls them "a violent, isolationist, and decadent race".[2]

At the height of their power, the regal arakkoa plotted atop their high peaks, well out of the reach of the brutal Shattered Hand orcs and the wingless outcasts below.[3] The arakkoa gazed out from these treacherous perches, watching their land like incarnate gods ... and paying homage to the blessed sun by burning the "low races" alive.[4] The Adherents had a caste system, and one's place in society was chosen before you were even given a name.[5]

The Adherents covered up Terokk's rule, writing of it in many scrolls and tomes as a time of darkness where the tyrant Terokk had committed crimes and depraved acts. According to this false history, Terokk's tyranny was brought to an end when the Adherents rose up against him and liberated the arakkoa from oppression. Rukhmar then turned her back on Terokk and he became shriveled and maddened.[1]

The Adherents were searching for Apexis artifacts across Draenor to use their technology against the Arakkoa Outcasts. They claimed it was theirs by the will of Rukhmar, but in truth they found sites such as the Apexis Excavation by accident. They used this salvaged Apexis technology to create a crystal superweapon, which was used to fire beams of light down on the Outcasts below, setting their towns on fire.

Following the player's actions in the Spires of Arak[6] and the death of High Sage Viryx, the remaining Adherents abandoned their fanatic hatred of the Outcasts and joined forces with them in the newly-formed Order of the Awakened.[1]

Shadow magic is strictly prohibited in Adherent society.[7] The punishment for crimes in Adherent society, such as owning tomes of dark magic among other things, is being tossed into the pools at the Sethekk Hollow, transforming arakkoa into a cursed, flightless state. This method served to create the flightless arakkoa encountered both in Draenor and later in the main timeline's Outland. The Adherents fear and hate the arakkoa cursed by Sethe.

The Adherents pair young arakkoa together. Doing so means the fledgling members of the order can watch over each other and ensure that everyone follows the decrees Rukhmar. If one accomplishes a great feat, both would be showered with praise. Likewise, if one transgresses, both would be punished.[1] Flying arakkoa also carry with them dreamcatchers that are said protect them from Sethe's curse. The dreamcatchers allegedly absorb the Curse of Sethe and then get rid of the darkness in the morning light.[1]

The flying arakkoa hold a festival celebrating Rukhmar during the time in the summer when the days are the longest.[1] As well, every time a mark on a sundial is cast on by a shadow they say a prayer to their goddess.[1]

While the ancient Apexis wielded the Light,[8] the Adherents used solar nature magic comparable to druids.[9]