Advisor Melandrus, First Blade of Grand Magistrix Elisande, is a high-ranking nightborne and the final boss of the Court of Stars. He was the one responsible for betraying First Arcanist Thalyssra when she attempted to prevent Elisande from allying with Burning Legion, leading to Thalyssra's exile and transformation into a nightfallen. 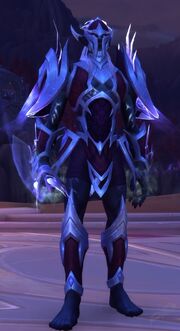 Melandrus in World of Warcraft.

Melandrus was present when Gul'dan, emissary of the demonic Burning Legion, appeared before the nightborne with his offer: bring down the barrier around Suramar, give him access to the Nightwell and become allies of the Legion, or be destroyed. While First Arcanist Thalyssra argued that the Legion would not be making offers if they were actually capable of destroying the barrier, Melandrus countered by theorizing that the demons must be desperate and needed the Nightwell's power immediately. When Thalyssra and Advisor Vandros then began to argue whether or not to accept the Legion's offer, Melandrus told his fellow advisor that even though they could argue all night, the decision ultimately lay with Grand Magistrix Elisande.

Two days later, however, Melandrus, saying that the nightborne would not become the Legion's honored allies, but its fel-cursed servants, joined Thalyssra and several others in planning a rebellion against the Grand Magistrix to prevent her from giving in to the Legion's threats. During the night, the rebels stormed into the city, but were ambushed by Elisande's soldiers. Melandrus and Thalyssra managed to evade the fighting, making their way to just outside the Magistrix's palace. However, in that moment, Melandrus raised his sword and stabbed Thalyssra through the back, saying "I am sorry, my friend... but allegiance is the only way". He then pushed her over the edge, sending her into the river below, before joining Advisor Vandros and the Grand Magistrix in bringing the barrier down.[1]

First Blade of the Grand Magistrix, Melandrus rarely leaves Elisande's side. He has eschewed the magical arts, instead harnessing the power of the Nightwell to heighten his reflexes and his movements to inhuman levels.

Melandrus uses a variety of sword strikes to cripple his enemies, pairing magic with skill in a frightening fashion.


Advisor Melandrus is generally the most difficult boss in Court of Stars. The encounter is somewhat punishing in terms of melee uptime, and so it is important that melee plan movement out so they may react to Melandrus' frequent dashes. A death knight tank is highly recommended on higher Tyrannical keystones, as

[Vampiric Aura] (20% leech for 15 seconds to the party upon casting Consumption) is extremely helpful in dealing with Slicing Maelstrom.

Over time, clones progressively spawn throughout the encounter (at most eight may be active). It is important that party members do not stand near these, for they amplify the damage of Slicing Maelstrom. Additionally, their Piercing Gale lines must be avoided.

Slicing Maelstrom is the mechanic that singularly makes this boss the hardest in the instance. Advisor Melandrus casts this ability once every 25 seconds after being engaged, and it deals progressively higher damage as additional clones spawn from Blade Surge. Generally speaking everyone should have a defensive cooldown active for this (Prydaz helps, though it does not line up perfectly) and the healer should have a cooldown rotation prepared for the later Maelstrom casts at higher keystone levels. As noted earlier, death knight tanks can mostly trivialize this boss by use of Consumption (which is available for every second Maelstrom cast).

It should be noted that Melandrus' actual tank damage is quite low, and therefore tanks can in some cases continue in the event of a near-full wipe to Slicing Maelstrom and go on to kill the boss, even on higher Tyrannical keystones.

Intro (non-achievement)
Advisor Melandrus says: Must you leave so soon, Grand Magistrix?
Elisande says: Do you expect me to waste time chattering with vapid nobles even as my enemies close in? Look there, you fool! We are not alone.
Advisor Melandrus says: Impossible! My guards would never permit such an intrusion!
Elisande says: Yet another failure, Melandrus. Consider this your chance to correct it. Dispose of these outsiders. I must return to the Nighthold.

Wipe
How dare you interrupt your betters!

Outro
Ly'leth Lunastre says: We may have missed our chance at the Grand Magistrix tonight, but her time will come. Sooner or later we'll find another way to settle the score...