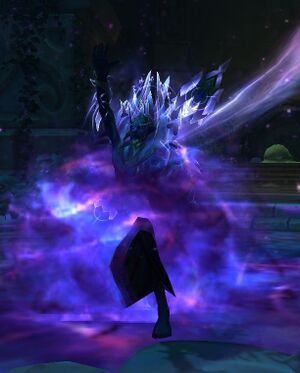 Vandros was once a young noble in the Court of Farondis.[2][3] When Prince Farondis planned to destroy the Well of Eternity, Vandros reported this to Queen Azshara herself. Azshara wasted no time in punishing Farondis and his people. In a frightening display of arcane power, she destroyed the

[Tidestone of Golganneth], and in doing so, released a wave of dark energy over all of Azsuna and its inhabitants.[2] Evidently, Vandros would later join the Highborne of Suramar when they created a shield to protect their city. 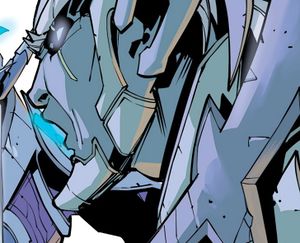 Vandros arguing with the other advisors.

Vandros was present when Gul'dan, emissary of the demonic Burning Legion, appeared before the nightborne with his offer: bring down the barrier around Suramar, give him access to the Nightwell and become allies of the Legion, or be destroyed. Afterwards, Advisor Melandrus wondered if the Legion was trying to negotiate because they had need of the Nightwell's power immediately, to which Vandros responded that it is always better to negotiate while having the advantage. First Arcanist Thalyssra countered by saying that Vandros was a fool if he believed the demons would keep their word, to which the advisor responded that the nightborne were outnumbered and that it was a risk they had to take. Melandrus ended the argument by saying that the decision was ultimately up to Grand Magistrix Elisande.

Two days later, with the three-day time limit for Gul'dan's offer nearing its end, Elisande revealed to Vandros that she had decided to accept the Legion's offer and told him to gather her advisors. Despite a brief and unsuccessful uprising within the city by Thalyssra and a group of rebels, Vandros helped the Grand Magistrix bring down the barrier and expose their city to the Legion.[4]

Vandros is one of Elisande's closest advisors, and an adept at harnessing the arcane magic of the Nightwell, second only to Elisande herself. He would not ordinarily venture into the Arcway himself, but after monitoring the state of the nightfallen resistance and their allies, he now feels the need to take matters into his own hands.

Advisor Vandros uses the power of the Nightwell to influence time. He frequently summons Chrono Shards and attempts to erase players from existence with Banish In Time.

Intro
My, my... Someone has made quite a mess down here. It has been too long since we purged these catacombs of refuse. It appears we have a rat infestation.

Aggro
I have not survived for ten thousand years just to fall to a swarm of rats.

Chrono Shards
Have you vermin ever witnessed such raw power? I think not.

Banish in Time
I am a conduit of the Nightwell's glorious power! I am NIGHTBORNE!

Successfully reached the boss in time
Enough! You little beasts are getting out of hand!

Wipe
Alas... blind courage only triumphs in the fairy tales.

Death
The Grand Magistrix... will have your heads for this...

Unused quote
Find the vermin and bring me their heads! Leave no stone unturned!