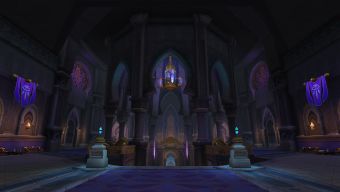 Aegwynn's Gallery is an underground section of the Chamber of the Guardian, located below the Chamber upper area. It acts as a library and stronghold for the Kirin Tor, hosting many bookcases and seating areas. The complex was notably used to house the artifacts known as the Pillars of Creation, which would prove crucial in defeating the third invasion of the Burning Legion. It is named for Aegwynn, the most powerful Guardian of Tirisfal.

During the conflict, the naaru core known as Light's Heart fell from the sky near Dalaran and was retrieved by Khadgar and his allies. The core was brought to a room in the Chamber of the Guardian for examination, and there a message from Turalyon appeared before Khadgar. He would explain the current situation regarding the Army of the Light, and stressed the importance surrounding light-infused item before them.[1]

As the war in the Broken Isles continued, the artifacts known as the Pillars of Creation were gradually recovered from across the region, and stored safely in the main underground section of the Chamber of the Guardian; these items would be crucial in eventually defeating the Legion's invasion. Upon securing each within the chamber, major figures such as Odyn, Tyrande Whisperwind, Mayla Highmountain, and Prince Farondis paid visits to comment on their recovery.[2][3][4][5]

The banished mage Levia Laurence, enthralled by the imp mother known as Agatha, used a room in the Chamber of the Guardian for a demonic ritual to reach the demon. Ritssyn Flamescowl and an ally of the Kirin Tor followed Levia's trail to this ritual room in order to stop her, using the runes she left behind to reopen her portal.[6]