Aelthalyste is a banshee priest trainer located in the War Quarter in the Forsaken's Undercity. She is a part of the Forsaken priest order.[1]

During the Burning Legion's third invasion Aelthalyste and her companion, Roland Abernathy of the Conclave traveled to the Pass of An'she in Highmountain on the Broken Isles. Roland has fallen ill and Aelthalyste asked the Conclave for help.

The High Priest aided her in producing a cure for the demonic contagion infecting Roland. Upon traveling to Deadwood Landing on the Broken Shore, she tracked the source of the contagion that also affected the fighters on the isle. After dealing with fel spreaders and healing the Legionfall soldiers, she joined the Conclave at Netherlight Temple as a Champion.

During the Battle for Lordaeron, Aelthalyste was seen holding a portal in the Magic Quarter for the evacuee.

She participated in the Battle for Darkshore. 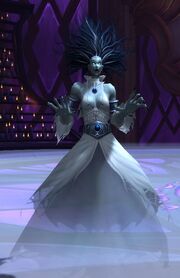 The banshee Aelthalyste, in the Undercity, whom most priests report to, is the closest thing to a true leader for the Cult of Forgotten Shadow. Although the cult has no official leader.[2]