For his appearance in Razorfen Kraul, see Spirit of Agamaggan.

Agamaggan, the Great Boar, was one of the Ancient Guardians and one of the first and most powerful beings to ever live.[4] He was killed during the War of the Ancients, and his remains became what is today the Razorfen. Agamaggan is the progenitor of the quilboar race, who worship him fervently.[4]

Agamaggan in the War of the Ancients

During the War of the Ancients, Agamaggan was one of the many Wild Gods that Cenarius rallied to join with the Kaldorei Resistance against the Burning Legion and assault Zin-Azshari.[5] He slew thousands of doomguards and felguards with fury. He stomped the ground with his massive hooves, breathed corrosive acid upon his enemies and cast rains of thorns detaching from his back, causing considerable harm to the demons.

The battle between Agamaggan and the demons was lengthy, and ranged across the continent, toward the west. Agamaggan even fought the pit lord Mannoroth, Archimonde's lieutenant. Eventually, the great boar fell before the endless numbers of the demons, sacrificing himself to allow Malfurion Stormrage and others to reach the Well of Eternity.[6] 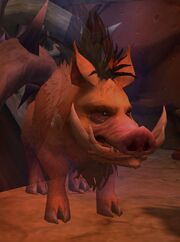 Thousands of years after Agamaggan's death, Charlga Razorflank, crone of the Death's Head and Razorfen tribes, sought to resurrect the demigod. However, the dark and violent rituals Charlga and her minions performed were quite at odds with the Ancient's noble and protective demeanor.[7] In response, the Spirit of Agamaggan appeared in the Razorfen Kraul, causing the entire area to come alive.[4] The Spirit asked adventurers to help defeat Charlga in the hope of steering the demigod's children back to their noble roots.[8]

When Malorne becomes trapped in the Emerald Nightmare and forced to relive his death at the hands of Archimonde during the War of the Ancients, a figment of Agamaggan is seen battling demons nearby.[9]

The entrance to Razorfen Downs is thought to be Agamaggan's skull.

Legends state that where Agamaggan fell, his blood gave rise to great masses of thorny vines. Many of his quilboar descendants have taken up residence in the largest cluster of giant thorns, the Razorfen, which they revere as Agamaggan's resting place.[10] Agamaggan's body makes up the entirety of the Razorfen, the holiest of all thorn clusters, but the Razorfen Downs are especially protected because the entrance is made from the demigod's great maw. The quilboar believe that it will swallow whole those not loyal to him, and spit out their bodies after Agamaggan has chewed them up. According to Mangletooth: "Agamaggan has left his body behind to protect us, and he gives of his spirit so we may protect him."[11]

The shaman and geomancers of the quilboar tribes call upon the strength of the Great Boar to help them in battle and in their rituals.[12] The Blood Shards, said to be formed from the blood of Agamaggan, are especially prized by the quilboar.[13] Boars are revered within quilboar culture, and particularly large and tenacious ones are seen as a favor from Agamaggan.[14] 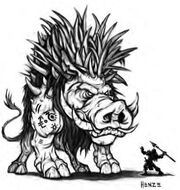 Thick masses of thorny vines hang all over the body of the looming, immense boar, curling around a wrinkled snout ending in yellowed tusks that curve sharply upward. Dark, steely eyes peer out from underneath a furrowed brow. He paws the ground with a wagon-sized hoof, causing the earth to shake and rumble, and as he snorts a cloud of steaming vapor hisses from his nostrils.[15]

Agamaggan's spirit is believed to reside in the afterlife. Today he is the patron of the quilboar tribes, nearly all of whom revere the boar god and pray for his return.[16] Further, they welcome the chance to join Agamaggan again in the afterlife.[17] Since returning to their wilder roots, some orc clans have begun to worship Agamaggan, as have some among the night elves who respect his strength and courage and wish for a return to the wilder and less ravaged time in which he lived. This worship usually takes the form of sacrifices and the consumption of burnt offerings, though on occasion more zealous worshipers will engage in single combat.[18]

Hesitation in combat is unknown to Agamaggan. He will fearlessly charge and throw his full strength against any opponent. His first assault usually concentrates on spellcasters, eliminating their unpredictability from the field of battle. In the middle of a group of opponents, he will use his special attacks to knock down a number of opponents. Believing that he can gain an enemy’s strength by consuming it, he will do his best to keep fallen opponents from being recovered or revived by their allies.[16]