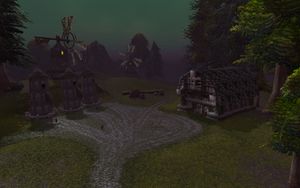 The Agamand Mills was a vast windmill network once controlled by the Agamand family in northern Tirisfal Glades. The mills were lost to the Scourge, the family was slain, and the entire residence was claimed by the undead. This is probably the largest Scourge outpost in Tirisfal.[1] 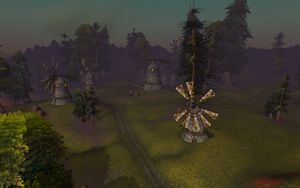 When the Scourge attacked Lordaeron, the Agamands decided to hold fast to their home, and ordered their farmhands to remain on the property to defend it. This effort proved to be in vain; the Agamands and their farmhands were massacred by the Scourge, and most of them arisen in their service.[2] However, a select few broke away, and became Forsaken instead.

Captain Dargol used necromancy to raise the ancestors of the Agamands and planed to use them against the Forsaken. He now resides in the strongest point in the mills, the Agamand Family Crypt.[3] Coleman Farthing, a former farmer of the Agamand Mills, can be found near a small camp not far from the road leading into the mills that starts at Garren's Haunt. He blames the Agamands for his death and sends adventurers to end the undead family that still roam the mills.[2]

The Agamand family once controlled this vast windmill network. Now the mills are vacant, and the Agamand ghosts, unaligned with the Forsaken, haunt their former home. Many animate skeletons can be found here as well. This is a great spot to test your mettle against undead before venturing into the Plaguelands.[4]