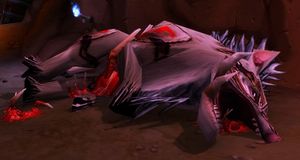 Agathelos was a colossal armored boar roughly twice the size of a common thunder lizard, and becames even bigger when enraged. He was kept in a short tunnel guarded by several quilboar who maintained a field to keep the monstrous creature penned in.

Given that the god and progenitor of the quilboar is Agamaggan, a titanic boar, an animal such as Agathelos is one of considerable spiritual significance.

He was eventually killed and his body was left lying on blood pools to be feasted on by Groyat.

Boars are revered within quilboar culture, and particularly large and tenacious ones are seen as a favor from Agamaggan. Already a powerful creature, Agathelos has been fed Kraul bat guano, which produces a maddening effect, resulting in increased stamina and strength. The Death's Head plan to utilize Agathelos as a powerful weapon to crush all who oppose them.