Age of a Hundred Kings

For the Isle of Thunder object, see Age of a Hundred Kings (object). 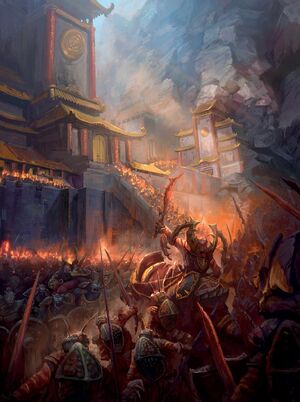 Mogu defending themselves against the mantid.

The Age of a Hundred Kings was a wartorn time period in the history of Pandaria, 15,000 years before the opening of the Dark Portal,[1] when mogu warlords fought for territory and power,[2] their battles scorching the land and terrifying the other mortal races.[3] During the Age of a Hundred Kings, the mogu found necromancy. Powerful mogu necro-lords ruled their tribes from crypts dug deep beneath the surface.[4]

After their master, Ra-den, fell silent and their bodies were turned into flesh and blood by the Curse of Flesh, the mogu became frustrated. After a thousand years without orders from their master, the mogu began to argue amongst themselves, soon falling apart into warrior clans.[5] Their culture, language and identity began to change, and the mogu came dangerously close to destroying themselves from within. At the beginning of each new mantid swarm, the clans would reluctantly band together to defend their lands against the insectoid threat, but once the swarm had been fended off, they would once again fall back to infighting.[1]

So the cycle continued for many years. However, one king was more ambitious than the others.[5]

Known as Lei Shen, this young warlord ascended to the top of the Thundering Mountain and stole the power of the mogu's titanic master. When Lei Shen returned from the mountain, he dubbed himself the "Thunder King" and began uniting the mogu under a single banner. Armed with the power of storms, the Thunder King gathered together his followers and began the systematic conquest of the other mogu warlords, founding the first great mogu empire and putting an end to the Age of a Hundred Kings.[6]