Agent Connelly is a retired SI:7 agent and master of disguise. He comes out of retirement, after the player completes

[90] Stirred, Not Shaken to help the Alliance in Operation: Shieldwall.

Before retirement, Agent Connelly was an SI:7 agent for the Alliance who infiltrated the Horde many times. After retirement, the SI:7 had agents track his every activity for months. Recently he has disguised himself as Professor Kilt at the Brawler's Guild because of an old score he had to settle. Rumor has it he's after one of the fighters at the Brawler's Guild for some long forgotten betrayal.

Agent Connelly can be found disguised as Professor Kilt at the Boom Room section of Bizmo's Brawlpub. After players complete

[90] Stirred, Not Shaken, Connelly goes to "gather supplies and reconnect with old contacts", he later sends a letter saying he has embedded himself with some Horde scouts in Pandaria (later found out to be Kun-Lai Summit). He then finishes the letter by saying he may need your skills soon. 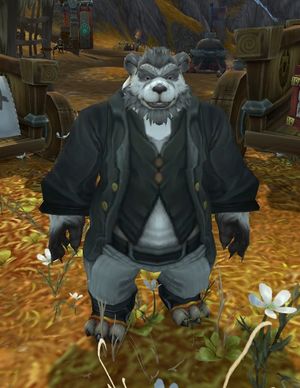 In his pandaren disguise.

[90] He's In Deep, the hero is taken to Agent Connelly found outside a Horde camp disguised as Cousin Goottooth. After handing in the quest, he gives the hero the quests

Later in the quest

[90] The Kun-Lai Expedition, heroes return to Kun-Lai Summit at the Grummle Bazaar to meet up with Agent Connelly now disguised as a pandaren. After handing in

[90] A Kor'kron In Our Midst, where heroes must collect Kor'kron armor parts to make a

[Kor'kron Disguise]. Agent Connelly then contacts the hero via radio and gives them the next assignment

[90] Memory Wine, where they use the Kor'kron Disguise to gather information from the Kor'kron. After finding our the location of the

[Divine Bell], the hero returns to Agent Connelly and finish the quest.