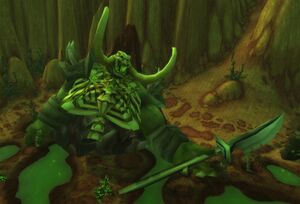 Aggonar was a pit lord who resided in Outland until he was killed. Later he appears in Argus.

When the pit lord Aggonar died, his fel blood poured into the sacred springs of the draenei, fouling the very essence of the holy water. They would now be known as the Pools of Aggonar, where fetid creatures spawn.[1] The pools are the location of the Altar of Aggonar, the still skeleton of the pit lord, and the man'ari Arazzius the Cruel who leads the Burning Legion in Hellfire Peninsula.

Aggonar had since reformed in the Twisting Nether, returning to the Annihilan Pits on Argus, from where the pit lords assaulted the Krokul Hovel in Krokuun.[2] Aggonar was defeated by High Exarch Turalyon, Alleria Windrunner, and an adventurer from Azeroth.[3]