“Go'el, as long as you have this great heart to lead—and to love—then know that I will go with you to the ends of any world and beyond.”

Aggralan, more commonly known as Aggra (pronounced "AW-gruh),[7] is a Mag'har orc shaman from Garadar in Nagrand. She was charged with training Thrall in the traditional shamanic arts and, despite initial disagreements, the two quickly bonded and began a romantic relationship, eventually becoming life-mates.

Aggra was born of a shattered world, and learned the ways of the elements among the Mag'har orcs of Outland.[8]

Shortly before the Cataclysm, Thrall journeyed to Garadar to discover why the elements of Azeroth were so afraid. When he arrived, Greatmother Geyah advised him to turn to the Mag'har Aggra, who told him that he had toed the line between being a leader and a shaman long enough and that he would have to give up his leadership to truly become a shaman. Aggra was Thrall's guide during a vision quest. Despite their rough beginnings, Thrall and Aggra grew closer to one another as he became truly connected with the spirits and became a proper shaman. Before returning to Azeroth Thrall and Aggra became mates.

When Thrall and Aggra returned to Azeroth, they participated in the funeral of Cairne Bloodhoof. The next day, she noticed that Thrall no longer wore the armor of Doomhammer, and she was satisfied. Both left Thunder Bluff and Mulgore and went to the goblin port town Ratchet where Gazlowe welcomed them and prepared a ship to the Maelstrom. The ship was called Draka's Fury in honor of all orcish women. Aggra was emotional and together with Thrall and a crew boarded the ship and left Kalimdor to the Maelstrom.[9] However, their journey would not be smooth as they had intended.[10] 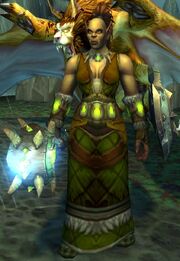 Aggra at the Maelstrom.

While en route to the Maelstrom Draka's Fury was attacked by Alliance forces and Thrall referred to as their "precious cargo" was lost. While Aggra commanded the shipwrecked crew of Draka's Fury on the Lost Isles she gained unexpected allies to the fight against Alliance. The Goblins of the Bilgewater Cartel, who were also attacked by the Alliance, and the Horde aided one in another in combating the denizens of the Isles and the Alliance forces who had captured Thrall. After all, Thrall was freed and the Goblin's joining the Horde, Aggra and Thrall successfully made it to the Maelstrom. She later appears at the Maelstrom (affiliated with the Earthen Ring) and sends adventurers into Deepholm.

During the battle with Deathwing in the nightmare caused by Iso'rath, Aggra tries to fight with Deathwing, though the Aspect ultimately kills her.

When Thrall found himself unable to completely focus on healing the Maelstrom, Aggra tried to get him to touch with the Spirit of Life. When Thrall was asked by the green dragonflight for aid, Aggra encouraged him to go, even though felt that he belonged at the Maelstrom. While not physically with him, there thought of Aggra was enough to encourage Thrall to never give up during his quest. When Thrall returned to Maelstrom he told Aggra everything that had occurred and was prepared to rescue Azeroth with her as Go'el.[11]

Rage of the Firelands

At the Maelstrom, Thrall strains himself attempting to commune with the elements. Able to feel how broken the world is, and with the elements remaining silent for him, Thrall tells Aggra that he will have to work without limits to fulfill this task and she leaves him.

After the Guardians of Hyjal and adventurers thwart the invasion of Mount Hyjal by the Twilight's Hammer and Ragnaros, a meeting was convened at the ancient World Tree of Nordrassil. Thrall and Aggra were among the gathered heroes at the meeting that ended in tragedy when an incredibly powerful agent of the Twilight Hammer interrupted the ceremony and struck down Thrall with dark magic, casting his spirit into the four domains of the Elemental Plane. While the Aspects conceded that Thrall may be lost to the elements forever, Aggra believed that her mate could be saved, and called on the aid of adventurers of both the Horde and the Alliance to venture into the Skywall, the Abyssal Maw, Deepholm, and Firelands to rescue her beloved from an eternity of torment. Before adventurers can return Thrall's spirit to the natural world, they must help him overcome his doubts, his willfulness, his desires, and his rage before he is bound to his elemental cage.[12]

Thanks to the efforts of Aggra and adventurers, Thrall is restored. Soon afterward, she and Thrall marry with notable figures in attendance.

Fall of the Destroyer

When the Dragon Aspects were planning how to defeat the Destroyer, Thrall was spiritually tortured by Deathwing. Aggra found his body and stayed by his side until he was freed.[13]

After the defeat of Deathwing by the hands of the Dragon Aspects, Thrall and the mortal adventurers, Alexstrasza revealed that Aggra was bearing Thrall's child.

Aggra learned about the fall of Theramore and understood Thrall's pain. When Thrall received a vision of an unknown figure going to use enslaved water elements to destroy Orgrimmar Aggra wished to accompany him. Though she was convinced that since Thrall received the vision alone, then he must go alone. While resigned to this, she understood and wished him luck.[14]

At some point, she and Thrall journeyed to The Den in Durotar and while caring for the infant Durak, Thrall was approached by Horde heroes. After learning that Vol'jin was hurt and that the Darkspear may be trouble, Thrall left to help the trolls on the Echo Isles. Aggra wished him good luck as she cared for their son.[15]

Aggra and Durak accompanied Go'el to the trial of Garrosh Hellscream. She was said to be pregnant again. She was wary of Tyrande's first witness being Velen and grew outraged when she prevented Velen from speaking his heart. When the Dragonmaw attacked to ensure Hellscream's freedom, a group of their pirate allies attacked her. In response, Aggra slew them effortlessly, while protecting her son. She then reunited with her mate and immediately went to heal the wounded Jaina Proudmoore.[16]

During the war in Draenor, Aggra initially stayed behind on Azeroth to take care of her children.

Despite this, however, she later arrived at Wor'var in Nagrand together with Thrall and Draka. When Telaar fell she sent shadow hunters led by Shadow Hunter Kajassa to check in on the situation.

Later still, she can be found alongside Durotan during the attack on Grommashar and alongside Thrall at the Stones of Prophecy after Garrosh's death.

While Thrall goes on an introspective journey after Garrosh's death, Aggra stays at the Heart of Azeroth with Thrall's wolf Snowsong and Snowsong's pup, Snowfang, and serving the new Farseer of the Earthen Ring.

Though her family had a happy life in Nagrand, she understood the need to return for the sake of the Horde and Varok Saurfang. However, in time Sylvanas's forces took them by surprise and despite fighting fiercely it was not enough, and Thrall was taken. Soon after Aggra joined the Horde Council in convening atop of Grommash Hold following return of the Scourge and learned that Baine Bloodhoof, Jaina Proudmoore and Anduin Wrynn had been abducted as well and how Tyrande Whisperwind had neutralized her attackers.[19] Knowing that Thrall would want her to remain behind and safeguard their children, she encouraged Horde champions with finding and bringing them home.

She later received word from Calia Menethil, who gone to Oribos within the Shadowlands, of her husband's recovery.[20]

Main article: Elemental Unrest meetings#Phase 3, At the Throne of the Elements

Go'el thinks that I should have stayed back on Azeroth with our children. I have put him in his place on that matter.

My Go'el and I have been through much together. Now is not the time for us to be apart.

To be back in Nagrand after all of this time. It's a bit overwhelming for us both.

I just wish for us to both get back to our little ones once this is all over.

[102 - 110] Aggra's Guidance implies that Aggra was born after Draenor's transformation into Outland. If so, this means that she is currently in her mid-twenties or younger. She would have been approximately 20 or less when she first met Thrall in The Shattering.