For information about the in-game event, see Gates of Ahn'Qiraj.

The Ahn'Qiraj War[1][2][3][4] (also called the second War of the Shifting Sands)[5] was a conflict that started after a millennia of the imprisonment of the qiraji within the city of Ahn'Qiraj. The qiraji and their god used this time to recover their former strength, until the point that some qiraji were finding ways to bypass the wall.[citation needed] [6]

After the War of the Shifting Sands the Scarab Wall was erected to contain the qiraji within the city of Ahn'Qiraj until a more hopeful stratagem could be devised. Should any mortal ever wish to pass the magical barrier and access the ancient city, they need only strike the Scepter of the Shifting Sands against the Scarab Gong and the gates would open. Hoping to contain the threat for all eternity, the arrogant Fandral Staghelm then broke the scepter, both insulting and angering the bronze dragonflight.[7]

The threat posed by the qiraji has thus remained behind its wall for thousands of years. Recently, however, the unmentionable Old God C'Thun slowly awakened from his slumber beneath Ahn'Qiraj. Behind the gates of the Scarab Wall, the merciless qiraji stirred once again. Empowered by the Old God, C'Thun, the qiraji prepared their legions for a worldwide assault to avenge their bitter defeat at the hands of the night elves a thousand years ago.[8] 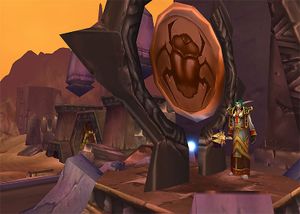 It was discovered that some of the qiraji were finding ways past the wall. Anachronos, the bronze dragon, helped the adventurers of Azeroth open the Scarab Wall to prevent more incursions. To oppose the qiraji the Might of Kalimdor was formed by Alliance and Horde. But before the gates could be opened there was a lot of preparation they had to deal with: gathering war supplies and reconstructing the Scepter of Shifting Sands. Any adventurer could contribute war supplies to the cause and gather hundreds of thousands of items.

To reassemble the Scepter of the Shifting Sands, adventurers had to acquire three shards that had been distributed to the red, blue and green dragonflights. The red shard was entrusted to Vaelastrasz, who was hunting down Nefarian. But after, he was beaten, broken and enslaved by Nefarian who took the scepter shard from Vaelestraz. To get the shard, adventurers had to kill Nefarian. To get the blue shard adventurers needed to follow Azuregos' wacky ramblings, learn draconic and killing Maws. The green shard was held by the corrupted dragon Eranikus. Tyrande and Keeper Remulos worked together to purge the corruption from Eranikus and regain the green shard.

After Shiromar[9]rang the gong with the Scepter, the ancient gates of Ahn'Qiraj opened, revealing the horrors of a forgotten war.[10]

After the Gates of Ahn'Qiraj were shattered, and the qiraji poured forth. The combined forces of the Horde and the Alliance, with High Overlord Varok Saurfang as their Supreme Commander, had to stop the qiraji before they could overrun Silithus and eventually Kalimdor. The qiraji General Rajaxx commanded the opposing forces, and an endless flow of silithid and Anubisaths flooded Silithus. This battle stretched across all of Kalimdor, with qiraji resonating crystals summoning the insects.[11] Nonetheless the Might of Kalimdor was victorious. The last of the qiraji forces were defeated, retreating back to the ancient city-fortress of Ahn'Qiraj. The qiraji Resonating Crystals littering Kalimdor vanish as quickly as they appeared, leaving behind nothing but sundered earth.[12]

Alliance adventurers fought the qiraji and finally reached the Chamber of C'Thun.[13] After C'Thun was defeated his remnants were brought to Caelestrasz.[14]