From Wowpedia
(Redirected from Ahn'kahet)
Jump to: navigation, search

Ahn'kahet: The Old Kingdom (also referred to simply as Ahn'kahet, the Inner Kingdom,[1] or just The Old Kingdom) is an instance which entrance can be found in the Pit of Narjun in the Dragonblight at the end of a grand hall; from Kilix the Unraveler, go left and head downward. The huge underground city serves as home to remnants of the once magnificent Nerubian Empire.

Ahn'kahet is one of the sections of Azjol-Nerub, the other being the Upper Kingdom. The city is controlled by Scourge nerubians and Yogg-Saron's faceless ones, with a presence of the Twilight's Hammer. 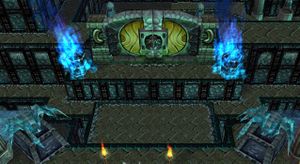 The gate leading to the Old Kingdom.

Arthas Menethil and Anub'arak crossed it to reach the Upper Kingdom and ultimately Icecrown Glacier. In their way across the Old Kingdom they fought still-living nerubians, who considered Anub'arak a traitor for serving the Scourge, rescued a group of imprisoned undead nerubians, destroyed some nerubian eggs and killed one of their queens. They also faced some faceless ones and a terrifying forgotten one before escaping to the Upper Kingdom.[1]

In the Upper Kingdom, undead nerubians patrol the ruins of their homeland, guarding clutches of eggs that will one day bring forth a new generation of Scourge warriors. Meanwhile, in the depths of the Old Kingdom, Ahn'kahet, another enemy stirs: the faceless ones. Little is known of these horrifying creatures, but rumor has it that they answer to an evil power lurking beneath Northrend. Destroying the undead nerubians and their tainted eggs will deal a great blow to the Lich King, but eliminating the mysterious faceless ones is also crucial to reclaiming the fallen empire.[2]

Azjol-Nerub was an empire of great strength when the Lich King arrived in Northrend. Despite ferocious resistance, however, Scourge forces managed to overtake the subterranean kingdom and slaughter its inhabitants, the nerubians. Scarred by years of war and abandonment, this vast domain is now occupied on two fronts. 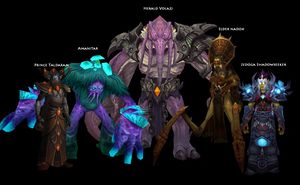 On heroic, it awards approximately 2300 reputation.

The Old Kingdom is one of the two sections of Azjol-Nerub, the other being the Upper Kingdom. This area is deep below the surface and is the original location of the Nerubian empire. The nerubians preferred to stay well below surface level. This area has not been well maintained because the Scourge never descended this far. By the same token, that means they have not looted as much here, and it is also easier to avoid them by staying to these lower levels. Most of the nerubian rebels live down here.[3]