Ahoo'ru is the final Rank 3 encounter in the Brawler's Guild. 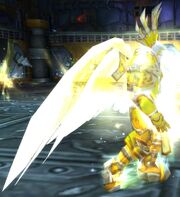 Ahoo'ru starts out the encounter immune to all damage with Divine Bulwark. There are three brightly-glowing orbs of light in the arena moving about alongside the Points of Light. Running into a brightly-glowing orb will spawn an Avenging Angel to start attacking the challenger. The angel must be attacked to below 50% health so it will Charge the player. Make sure to STOP DPS on the angel - don't kill it! While the angel is winding up a charge, move so Ahoo'ru stands between the player and the angel (and stay at least 10 yards away from Ahoo'ru), and sidestep out of the way as soon as the charge cast finishes. As long as the angel gets within a few yards of Ahoo'ru, Ahoo'ru will lose one of his three shield charges.

Try to have two angels up at the same time, and while one is winding up a charge, start working on the second. Occasionally the points of light will collapse in a circle on Ahoo'ru and then expand outward from his position. Kite the angel to Ahooru as they expand out.

Once Ahoo'ru is active, immediately pop all cooldowns and start burning him. Ahoo'ru will occasionally cast a Complete Heal that must be interrupted. He will also Crusader Smash while in melee range and frequently cast Divine Circle, spawning orbs around the player that, if touched, will tick for 30,000 damage a second.

Half of three Avenging Angels 433K health plus Ahoo'ru's 1.6M health translates to 18,800 DPS required to beat the enrage timer at an absolute minimum.

Intro
<Announcer> yells: He represents everything that is just, and righteous, and several other virtues which are of no interest to most of you. It's the draenei paladin, Ahoo'ru!
Ahoo'ru yells: You are being judged.

Gaining shield
Ahoo'ru yells: The Light is my shield.

Defeating Ahoo'ru will award the achievement I've Got the Biggest Brawls of Them All, sending victors to Rank 10 in the guild.