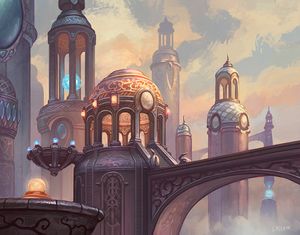 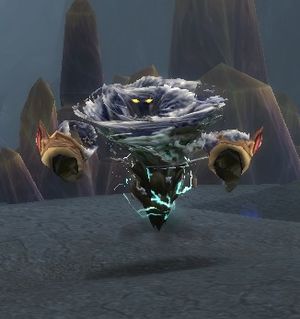 To keep Azeroth safe from these threats, the titans imprisoned the Old Gods underground and banished the savage elementals to the titan-constructed Elemental Plane, a secure dominion where the elementals could dwell without harming Azeroth. Four domains were created within this primordial realm to serve as ideal environments for each type of elemental. One of the Elemental Plane's domains, a realm of lightning and wind known as the Skywall, is home to the Air elementals. With the elementals' departure, nature calmed, and the world settled into a peaceful harmony.[4]

But, no matter each lord got to rule over his own realm, the different elementals kept fighting for supremacy and expansion, one of the worst of those battles becoming known as the Elemental Sundering, where Thunderaan the Wind Seeker, an elemental prince of air, was betrayed by Garr and Geddon, the lieutenants of Ragnaros the Firelord, elemental lord of fire, who consumed most of Thunderaan's essence, and stored what little remained of it within a talisman of elemental binding, which was shattered in two flawless pieces, assigned to his lieutenants.[5]

Immediately prior to the Shattering, the Elemental Lords discovered a way to break through their prison and send their armies into major cities throughout Azeroth.[6] Al'Akir ordered his lieutentant and herald, Prince Sarsarun, to collaborate with the Twilight Hammer in their invasions of Stormwind City and Thunder Bluff as part of the Elemental Unrest world event. These city assaults were then rebuffed by their defenders as Varian Wrynn and Cairne Bloodhoof led the charge against Sarsarun's hideout in the Ahn'Qiraj Terrace.[7] This was the first major loss for Al'Akir since Prince Thunderaan's defeat at mortal hands years ago and revealed the Windlord's new allegiance with Deathwing.

Following Deathwing's Shattering of the World Pillar in Deepholm and his destructive re-emergence into Azeroth, the Elemental Plane collided with the physical realm and resulted in drastic geographical upheaval, causing chaotic elementals to pour out into the world of Azeroth. Allied with Deathwing, their air elementals assault the recently discovered desert of Uldum, threatening to overrun the world once again.Siamat was sent by Al'Akir at the behest of Deathwing to the Neferset tol'vir to cure them of the Curse of Flesh in exchange for their loyalty. After becoming exhausted from converting the population of Neferset into their stoney bodies, the Neferset turned on him, trapping him within the tower at the center of their lost city. After slaying the leaders of the city, adventurers accidently freed Siamat. He was then defeated within the crumbled ruins of the tower that imprisoned him.

With Al'akir's demise, the air elementals descended into civil war. The majority of the air elementals of Skywall took part in the conflict, each attempting to show that they were powerful and intelligent enough to succeed Al'akir. The battle raged on for months with no true victor in sight, until a djinn named Typhinius showed himself. He had recovered the Fists of the Heavens, legendary fist weapons that were infused with the essence of Al'akir himself. With brute force alone, he was able to bring the air elementals' civil war to an end, crowning himself as the new lord of Skywall.

However, the Fists were chaotic and their power could not be contained by a soul that did not seek harmony or balance. It took everything he had to keep the Fists from splitting him apart, let alone keep his mind sane. In this maddened state, he attempted to launch an assault on Uldum and finish was his predecessor started. Despite the pleas of his fellow elementals to stay his hand and wait until they had recovered from the civil war, Typhinius forced the weakened elemental forces into battle with the Ramkahen. The war was short and the elementals were crushed, the Fists' strength alone not being enough to win. Defeated and maddened, Typhinius retreated to the Vortex Pinnacle.[8] He was summarily killed by Li Li Stormstout and the Monk Grandmaster, who took the Fists for themselves. 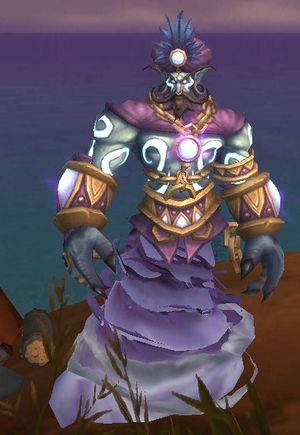 Air elementals, the violent and territorial monarchs of the skies, favor mountaintops and other high places for their lairs. These creatures appear as crackling clouds with two glowing yellow orbs for eyes. Two columns of mist shot through with lightning extend from the cloud like giant arms, each one encircled with blue metal bracers. They seek to effect change in the world (for example, erosion via wind). Air elementals create whirlwinds to suck up their enemies and also blind them with dust storms. Air elementals are the fastest and most agile of the elementals, moving with silent grace. An air elemental uses its special attacks whenever possible. It engulfs smaller opponents in its whirlwind first; if the elemental sees no opponent small enough to affect, it targets combatants with its dustcloud before engaging in melee.[9]