Akaari Shadowgore is a man'ari eredar and one of Sargeras' deadliest assassins. She wields the Fangs of the Devourer, a pair of deadly daggers which Mephistroth had crafted from the fangs of Goremaw, Sargeras' personal hound.[2]

Subtlety rogues seeking to claim the Fangs confront Akaari at her citadel in the Twisting Nether.

Akaari was once a distinguished eredar tracker who had made a name for herself in several Burning Legion invasions by silently murdering those who mistrusted the demons' promises of power. Sargeras, who had long searched for someone loyal and skilled enough to wield the fangs of his long-dead felhound, Goremaw, summoned Akaari to Argus, where she was informed of the great honor being offered to her. Sargeras promised Akaari that she would become his instrument of death and one of the deadliest creatures in any known realm, at the price of giving up her will: betrayal would become impossible. It was a grim bargain, but Akaari accepted it.

Akaari spent centuries in dark, secret chambers below the surface of Argus, her essence being shaped and molded and intertwined with the daggers' power. The souls of other eredar assassins were sacrificed and bound to her, granting her the experience of a hundred lifetimes and thousands of kills. When she emerged from the chambers, she had become a remorseless weapon of death, perfectly obedient to Sargeras. For her first test, Akaari was sent alone to infiltrate a small, militaristic world. Within a month, tales of an unseen assassin had spread like wildfire and the world's warriors broke into warring factions, blaming each other for the silent assassinations of their heroes and leaders. When the Burning Legion revealed itself, the world begged to surrender, as an eternity of servitude seemed better than constantly living in fear of daggers in the shadows. Having passed her test in stunning fashion, Akaari was brought back into the ranks of the Legion to support their efforts more directly.

The eredar proved to be an indispensable ally, able to not only eliminate whom she wanted, but also to take their place in disguise, perfectly mimicking their appearance and manner. Whenever the Legion faced someone who resisted their temptations, Akaari's blades handled the rest. One day, she requested that Sargeras allow her to roam the Twisting Nether for a time, which the Dark Titan allowed. Akaari spent time skulking among the Legion's own ranks, rooting out dissenters, traitors, and overly ambitious or powerhungry demons, and became a skilled interrogator and torturer. On a dead world, she built a fortress, Shadowgore Citadel, to hold prisoners and extract knowledge from them. Over time, the demons themselves began to fear Akaari and her weapons.

When the location of the Shadowgore Citadel became known to the rest of the Legion, Akaari made a show of abandoning it, as it had become a useless and unhelpful symbol. However, she would later secretly return to the citadel, but only to prepare for particularly difficult invasions or to interrogate particularly important prisoners. When she returned to Sargeras, she had gained new skills and a new philosophy: fear was a double-edged sword, useful, but not always the right choice. An unseen assassin inspired terror, yes, but an unknown assassin inspired complacency. An enemy could not prepare to face a danger that seemingly did not exist. She dedicated herself to becoming a truly invisible, silent killer, and her work continued.[3] 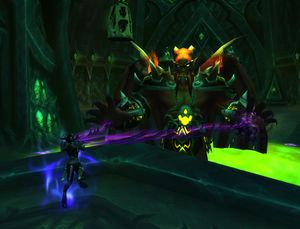 Kil'jaeden bestowing his blessing upon Akaari.

The Uncrowned, a highly secretive and clandestine society of rogues and assassins from across Azeroth, has hunted for Akaari for years. During the Burning Legion's third invasion of Azeroth, Valeera Sanguinar informed a newly-joined subtlety rogue that she was close to finally locating the elusive assassin[4] and sent them to speak with several contacts throughout Dalaran to learn of Akaari's location. A mysterious eredar named Val'zuun informed the rogue that Akaari was already present in the city, spying for her masters, but that he would not reveal her exact location until the rogue brought him a rune of portals.[5] After "borrowing" the rune from Archmage Celindra, the rogue and Valeera were told by Val'zuun that Akaari was in the Legerdemain Lounge, and a force of Uncrowned agents were swiftly sent to the lounge to corner the assassin. When the rogue confronted and seemingly killed Akaari, however, the assassin's body dropped the illusion and was revealed to merely be one of Akaari's bloodmaiden servants.[6] Enraged by the apparent betrayal, Valeera returned to confront Val'zuun, but he claimed to have been unaware of the deception and told the two rogues that he would be able to open a portal to Akaari's stronghold if they spared his life.[7]

Using the rune he was provided earlier, Val'zuun opened up a gateway to Shadowgore Citadel. Once there, the subtlety rogue confronted Akaari once more, but was paralyzed and taken to a holding cell by a jailer. After making their way out of their cage and ascending to the top of the citadel, the rogue witnessed a ceremony where the demon lord Kil'jaeden bestowed his blessing upon Akaari and the Fangs of the Devourer before ordering her to wreak havoc upon Azeroth's kingdoms from within. The rogue attacked Akaari once more, and this time succeeded in killing her and taking the daggers for themselves. Upon the assassin's death, the citadel began to initiate a self-destruct sequence, and so the rogue hurried back through another gateway to Azeroth.[1]

Only time will tell how Sargeras will respond to Akaari's death.[3] As she died in the Nether, she should be dead for good.

[Akaari's Soul] is still bound to the Fangs of the Devourer, and occasionally appears to assist the Shadowblade. 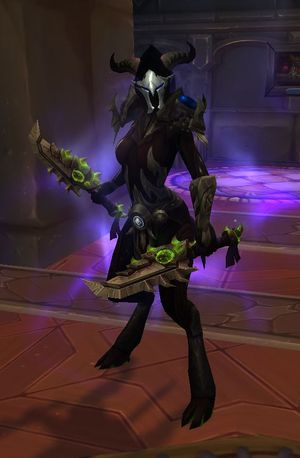 A bloodmaiden disguised as Akaari in the Legerdemain Lounge. Notice the daggers compared to the ones wielded by the real Akaari.