For the tablet, see Akali (object).

Akali is a Drakkari rhino loa. He is held in chains by his worshipers outside the gates of Gundrak.

At Har'koa's behest, adventurers free Akali who is quick to kill his subduers. However, the Prophet of Akali notices and declares "Enough", after which he drinks of the loa's blood, claiming some of his power. Infused by power of the loa, the prophet swiftly kills Akali.

Akali yells: I'M FREE, LITTLE DRAKKARI. TIME TO PAY FOR YOUR MANY TRESSPASSES!

Prophet of Akali yells: It is done. Run back to your masters. Run back to Har'koa. Tell her that I am coming! 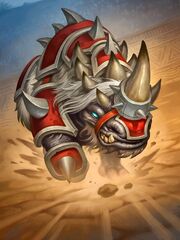 In the Hearthstone expansion Rastakhan's Rumble, Akali serves as the patron of Akali's Rhinos, a team of troll warriors, and personally appears as a legendary warrior card. His flavor text reads: "Most trolls only get to “AAAAHHH!” and don’t make it to the “kali” part."