“When the time is right, the Betrayer will become... the betrayed.”

The elder sage Akama is the leader of both the Ashtongue tribe and the elite of said tribe, the Ashtongue Deathsworn, a faction of Broken draenei supposedly in the service of Illidan Stormrage. Offered a chance at revenge against the orcs who decimated his people, Akama allied himself with the night elf/demon hybrid and aided in the overthrow of Magtheridon, only to later find that Illidan was no better than the pit lord. To all outward appearances, Akama remained a loyal servant of Illidan and led his Ashtongue Deathsworn in his service — but away from his prying eyes, Akama sought to end Illidan's reign.

Allying with Maiev Shadowsong, whom he had been charged with keeping imprisoned, Akama rallied a group of adventurers to enter the Black Temple, leading up to the final battle with Illidan himself — the battle that ended the Betrayer's life. With Illidan gone, Akama hopes that the Holy Light will fill the dismal halls of the Temple once more...

Although he has been called young during his time on Draenor,[6][7] Akama lived on the eredar homeworld of Argus, in Mac'Aree. An echo of him can still be found there, watching a jed'hin match at the Circle of Aspirants. His echo is the only one of the future Exarchs who does not have the title of Councilor (except for Naielle, who is a child). 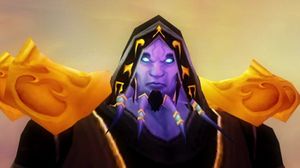 Akama before he mutated into a Broken draenei.

Akama was the Exarch of the Vindicators and a member of the Council of Exarchs, one of the leaders of the draenei under Prophet Velen chosen soon after the draenei crashed on Draenor.[8] Despite the position, he was apparently young, and spent his youth at the Temple of Karabor (indeed, his alternate counterpart was also called young).[6][7] When the orcs enslaved by the Burning Legion descended upon Karabor, Akama took charge of evacuating as many civilians as possible and then went into hiding with the remnants of the draenei. He fled from the Temple to Shattrath City before going into hiding, where he was the most exposed of the refugees to the fel energies that caused some draenei to mutate, sending him into a coma. Sometime after the general banishment of the Broken from the draenei camps, he came out of his coma and was sent on his way as well.[9]

Before and after the cataclysm and the shattering of Draenor, Akama took an interest in the activities of the former vindicator Nobundo, and had stealthily followed him time and again to observe his efforts to reconnect with the Light, a power the former priest was quite familiar with. After coming out of his coma, Akama had felt nothing but despair and a needling dread of the future. Perhaps he was hoping to see if he succeeded and pave the way back to Akama's own abilities and/or form; only Akama can say. What he certainly did not expect was to witness Nobundo's first contact with the elemental spirits, and while he couldn't hear the spirit of fire when it first spoke to Nobundo, it quite clearly was doing so and left Akama in absolute astonishment.[9]

Akama continued to observe Nobundo for another week, and watched as the elements defended Nobundo from the guards of a draenei camp, allowing him to pass through unhindered. Akama did not dare follow, but he didn't need to. The events that he had just witnessed planted a seed within him; seeing what Nobundo had just done, to see he had accomplished, stirred a feeling in Akama that he had feared long dead: Hope. He slipped back into the marsh with his newfound hope. Nobundo, while he had at times felt as if someone had been watching him through out his efforts, was never the wiser of what he had done for Akama.[9]

Akama later joined the Ashtongue tribe and gloated when a rival died, becoming leader of his people.[10] 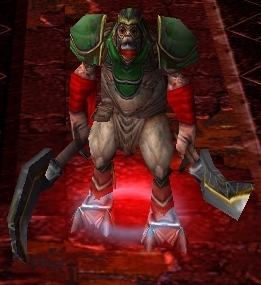 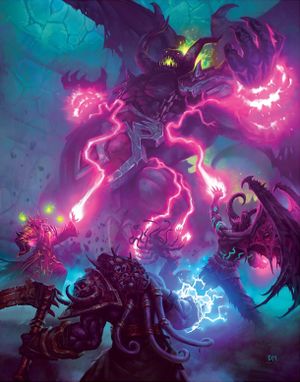 Years later, Akama, now an elder sage of the Broken draenei survivors, was forced into the open where he fought a losing battle against the pit lord Magtheridon and his army of demons and fel orcs.

Akama found himself aided by Kael'thas Sunstrider and Lady Vashj, a blood elf and naga who had come from Azeroth to find a cure for magic addiction. Hoping to gain allies in the fight against Magtheridon, Kael'thas and Vashj destroyed the fel orc base that had been raiding Akama's makeshift outpost. Akama pledged his loyalty to Illidan and aided them by attacking a larger orcish base, keeping the enemy occupied and away from Kael'thas and Illidan as the two closed the dimensional gateways — which were supplying constant reinforcements to Magtheridon.[11] After that battle, the time had come to lay siege to Magtheridon's Black Temple itself.

Akama pledged allegiance to Illidan, craving vengeance on the orcs and demons who had corrupted and slaughtered his race. He also hoped that reclaiming the Black Temple would redeem the Broken in the eyes of the draenei.[12] Using his

[Stealth] abilities, Akama and a band of his followers sneaked into Black Temple and destroyed the magical energy generators which sustained the defenses of the citadel, and then aided Illidan, Kael, and Vashj in the final attack against Magtheridon himself.[13] However, since the moment of Illidan's triumph he begun planning his inevitable conflict with Illidan.[14]

When Kil'jaeden appeared and ordered Illidan to destroy the Frozen Throne, Illidan, Kael, and Vashj went as ordered, while Akama remained to secure Outland in his absence.[15]

Enemy of my enemy

With more than a month without upholding Illidan's promise to return the Temple, which has gone under further corruption, to the Broken and seeing Illidan as another pawn of the Burning Legion, Akama contacted Maiev Shadowsong and met in Orebor Harborage. After he healed the Broken child Rosaria, Maiev arrived into the village and the two decided to work together against the Betrayer. Akama would then give her a stone enabling him to contact her when needed.[16] Akama would find himself greatly disturbed by Illidan's actions such as using Magtheridon to create more Fel orcs and the creation of the demon hunters.

Illidan would eventually learn of Akama's duplicity and instead of killing the broken, would instead bind a portion of his soul to his service. At Illidan's command Akama would ultimately trick Maiev into leading her forces into an ambush, with Maiev being the only survivor.[17] During this attack Illidan would use the souls of the departed in order to open a portal to Nathreza, though an unaware Akama would seethe that Illidan didn't spare the Ashtongue as promised, and that he used their harvested souls for an unknown purpose.[18]

Akama would later find himself appointed as Maiev's jailer and would inform the warden that both Illidan and himself had plans for the warden.[19] 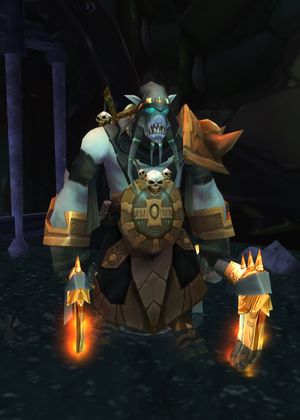 Akama in World of Warcraft. 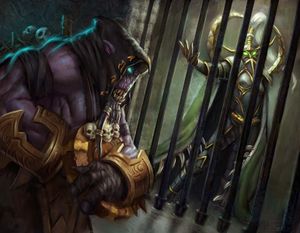 "Take this as my promise to you that when the time comes and you face Illidan, I will be on your side."

Akama is a level 70 Broken draenei located in front of Maiev Shadowsong's cell in the Warden's Cage in Shadowmoon Valley. In order to reach him, adventurers of the Horde and Alliance had to enter into the underground portion of the Warden's Cage and look to right at what appears to be just a pool of water. Swimming into and under the pool brought them into Maiev's cell where Akama is standing guard.

After an introductory quest chain, in which players have to prove that they are not allied with Illidan by killing some members of the Illidari, they are sent to speak with Akama. He explains that it is best for his people to continue to appear to serve Illidan until certain omens are fulfilled. He then gives a quest to speak with Udalo who is being held prisoner in the Arcatraz, a satellite of Tempest Keep. Udalo is dead, but has left a clue behind for the next quest.

On returning from the Arcatraz, Akama gives a quest to retrieve the Heart of Fury, one of the shards of the Ata'mal crystal, from the Ata'mal Terrace in Shadowmoon Valley. When this is completed, Akama sends the party to meet the naaru A'dal in Shattrath City.

Afterwards he was forced to kill his one of the closest ally, Seer Olum, because their plan against Illidan was revealed. Olum asked Akama to kill him in order to confirm Ashtongue's loyalty to Illidari.

The Shade of Akama, the portion of Akama's soul tied to Illidan's will, is a boss in Black Temple. Akama with the help of the adventurers released his soul and was also able to regain his people's trust. After the Illidari Council is defeated, Akama is assisted by the spirits of Udalo and Olum in opening the gate to the very top of the Temple. During the final confrontation with Illidan, Akama himself assisted adventurers in battle, although he cannot be killed. Akama leaves the battle during the first phase and is not seen again for the remainder of the battle; however, Maiev Shadowsong arrives for the final phase and remains until Illidan's death. Akama had freed Maiev from her prison cell and led her into the Temple with the aid of players seeking to obtain the

[Medallion of Karabor] that allows entry into the Temple. After Illidan is defeated, Akama swears to fill the halls of the Black Temple with Light once again.[20]

At one point, Akama joined the Brawler's Guild, saying that he had to keep his blades sharp due to the ever-present threat of the Burning Legion. He yields after being defeated by an adventurer.

Legacy of the Masters

Akama is distrustful of warlocks after witnessing Illidan's fall to his own corruption, followed by the invasion of the Black Temple by the Council of the Black Harvest after the Cataclysm. When a warlock Adventurer infiltrates the Black Temple following the trail of Jubeka and Kanrethad, they are ambushed by Akama. He agrees to help hunt down the two warlocks, recognizing the Adventurer's name.

Within the Twisting Nether, the spirit of Illidan Stormrage commands his surviving Illidari demon hunters to re-recruit Akama, as Akama knows Illidan's plans to destroy the Burning Legion.[21] Akama is confronted at the summit of the Black Temple by the demon hunters, and blows away all but their leader with bolts of lightning before proceeding to battle the leader. Akama's ultimate fate varies depending on which demon hunter the player chose as their second-in-command in the Vault of the Wardens:[4]

If the player chose Altruis, then during the battle in Niskara, Altruis tells Akama to stay aboard the Fel Hammer and assist whenever means necessary. When they arrive at the fel barrier where Caria and Varedis await them, Altruis orders Akama to use the Fel Hammer to open the way for them.

To many of my people I am known as a traitor... as Illidan's lapdog. It is best that they continue to think that for now.