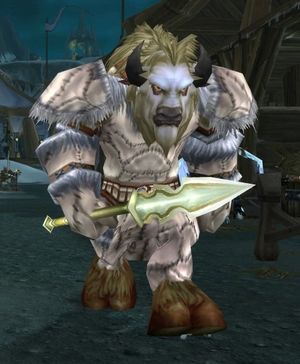 Akiak as he appears in World of Warcraft.

Akiak is a level 80 taunka found patrolling the Argent Tournament Grounds with Trag Highmountain in Icecrown.

Akiak encountered the undead tauren Trag Highmountain, while on a search for his mate Buniq. He saved him from falling to a hole. Instead of being disgusted or afraid of Trag's appearance he offered to take the tauren with him back to his village, Taunka'le. He later followed Trag into the Dragonblight, hoping to find Buniq there, and Buniq he found; although he had arrived to late, her body having been impaled by a magnataur's spear. Akiak and Trag returned to the village only to discover that it was under attack by the Anub'ar. Trag threw Akiak across the hole from which the nerubian were pouring out from and then jumped into the sinkhole. Not long thereafter the attack stopped, and Akiak knew that the taunka can thank Trag for that.[1]

Not long thereafter he led a band of taunka on an attempt the drive the Anub'ar away from the taunka lands. During an attack on the nerubian, they once again encounter Trag, who has recently been thrown out of Icecrown. Akiak offers him to stay with the taunka, and Trag gladly accepts the offer.[2]