Akunda, the thunder lizard, is the loa of storms and new beginnings. He believes that the storm has the power to wash away regret and sorrow.[1] Through a sacred ritual, Akunda enters the minds of those who come to his temple in Vol'dun seeking refuge and removes the memories that cause them pain.[2][3] His followers do good works to show the loa they are worthy of his blessing.[4]

The unwanted painful memories that Akunda takes from his followers are stored in the Valley of Sorrows,[3][5] where Akunda's power (normally) keeps them sealed away.[6]

As he commands the storms, Akunda allows the Eternal Spring near his temple to never run dry.[7] 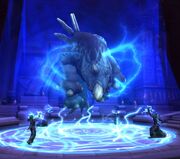 Akunda as he appears while imprisoned by his followers before the adventurer frees him.

Akunda later participated in the defense of Zuldazar when Zul and his forces sought to destroy the Great Seal. He held off sethrak as they attempted to invade the Zocalo.[12]

The loa assists his chosen aspect during the Battle of Dazar'alor.[13]

Initial
<The body of the loa has been incapacitated by magical bonds.>

[110 - 120] Ending the Madness
Welcome to my temple, <name>. Thanks to your brave deeds, you will always be received with hospitality here.


One day he hits with all de force,
De next day he be kind.
Much like Akunda's touch,
Dere be great power in his mind.


When ya courage goes astray,
When doubt be in ya heart.
Think of calm before de storm,
And Akunda do his part.[14]