Al'tabim the All-Seeing is one of the original Zandalar Tribe envoys sent to Zul'Gurub. He later returned as a rare mob on the Isle of Thunder as part of Zul's forces. 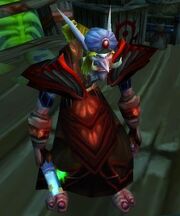 Al'tabim the All-Seeing was a level 60 quest giver once found on Yojamba Isle with a small group of Zandarlar trolls aiding adventurers in banishing Hakkar from Azeroth. Mages, Priests and Warlocks could turn in Paragons of Power to Al'tabim in exchange for special armor made by the tribe.

After Hakkar was defeated Al'tabim and his fellow trolls left Yojamba Isle back to Zandalar.[1] That was until the Cataclysm destroyed part of their land. He, along with those invested in Zul, made their way back to the main lands to reunite the tribes, and eventually to Pandaria. Due to the Zandalari's alliance with Lei Shen, Al'tabim can be now be found on the Isle of Thunder as a rare mob.

Al'tabim starts the encounter by casting Omen, which is an instant-cast debuff cast on all enemies that will one-shot most players after two minutes. Thus, 53,000 DPS will be necessary to beat him. He will recast Omen constantly while he is in combat, and it cannot be dispelled by any means short of immunity shields.

His other abilities are casting an interruptible Shadow Bolt Volley for a middling amount of damage, and calling down a Meteor Shower that drops meteors out of the sky on random locations in the area. Dodge out of the meteors, try to interrupt his volleys, and burst him down as quickly as possible to stave off the Omen.

I am Al'tabim the All-Seeing - an envoy of King Rastakhan.

My dealings are with priests, mages, and warlocks.

Al'tabim, I need assistance in recovering a piece of my Confessor's outfit.

Al'tabim, I need assistance in recovering a piece of my Demoniac's outfit.

Al'tabim, I need assistance in recovering a piece of my Illusionist's outfit.